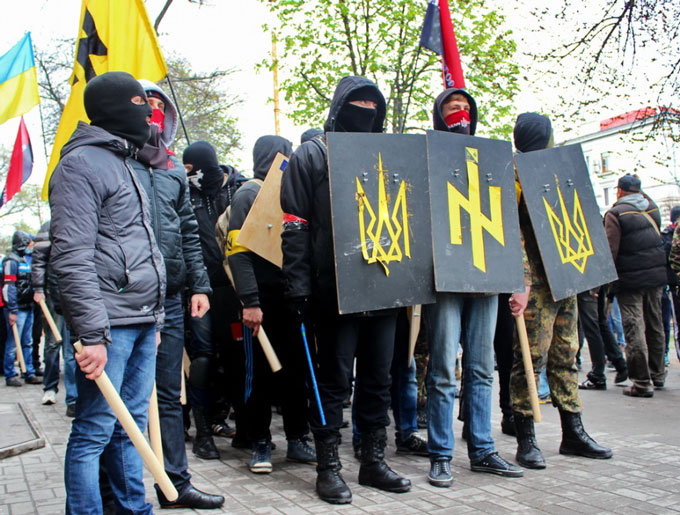 It’s well known that organizers of protests in Belarus enjoy every possible support of the Ukrainian radicals. Back in March Belarusian law enforcement units detained more than 200 activists of White Legion and Young Front. Stored in the warehouses of the nationalists were fire arms, ammunition, grenades, manuals on city combat, and attributes of the Ukrainian nationalistic groups Azov and UNA-UNSO. According to Belarus secret services, the opposition members had planned to employ this whole arsenal during mass rallies on March 25.

On March 21 President of Belarus Alexander Lukashenko publicly declared that he observed “foreign trace” in the attempt to destabilize the political situation in Belarus. He believes that Poland and Lithuania have been funding special camps to train Belarusian radicals on the territories of Ukraine and Belarus. Security was toughened on the Belarusian border with Ukraine following several illegal intrusions into the country by armed Ukrainian citizens. The precaution measures were justified as it turned out to be, for on March 24 the correspondence between Sergiy Kyslytsya, Deputy Minister for Foreign Affairs of Ukraine, and member of the Verkhovna Rada of Ukraine Oleksiy Honcharenko was leaked. They discussed the infiltration of Ukrainian nationalists across the Lithuanian and Polish borders into Belarus to take part in the protests during Freedom Day.

Eventually, the authorities scary of provocations and mass protests, banned festivities in the center of the city on Freedom Day, while the opposition rejected other proposed sites for their actions. Attempts by the activists to participate in the unauthorized march on March 25 ended up with skirmishes involving riot police and massive detentions. More than 700 detainees, 10 Ukrainians among them, were put into pre-trial detention centers. In disregard of the tough reaction of the authorities opposition members announced another series of protest actions up to “nation-wide strike”. Lukashenko characterized the police conduct as absolutely justified and once again stated he would allow neither “Ukrainian scenario ever occur in Minsk” nor any international interfering into domestic affairs of Belarus.

The Belarusian authorities have been trying to prevent the revolutionary processes in the country. Still it would be prematurely to declare victory over Minsk Maidan.  Increasing number of protests in Belarus now coincides with the obtaining of full freedom of action by Ukrainian radical organizations who willingly share their experience, financial donations and military equipment with the radical groups in Belarus. The contacts of Young Front with Right Sector and Azov, as well as involvement of the Belarusian nationalists in Donbas war on the side of Kiev, amounts to a really dangerous factor for Lukashenko which he can’t ignore. At the same time the authorities in Ukraine are becoming increasingly tense over the threat the uncontrolled radicals pose. That’s why they choose it to encourage the links of the local radicals with the opposition in Belarus rather than hamper them. Minsk events visibly reveal that Poroshenko is rather successfully and profitably for himself diverting the aggressiveness of the Ukrainian nationalists into Belarus.

Unlike similar events of previous years Minsk Maidan now is of unprecedented interest for many parts including radical elements in Belarus and Ukraine, moderate Belarusian opposition, international human rights organizations, and governments of Ukraine, Poland and Lithuania. This makes a coup in Belarus quite possible and even probable in 2017.