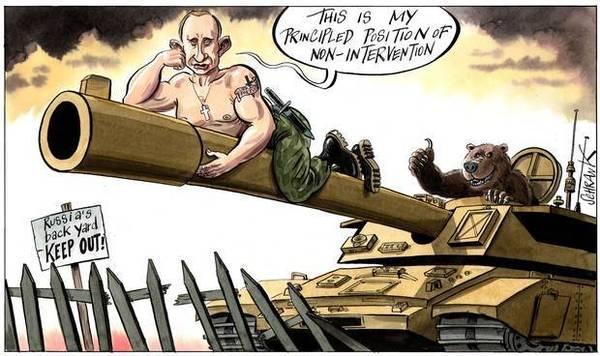 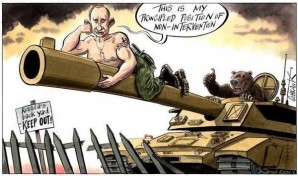 A year passed since the Maidan Square events in Kiev, provoked by Moscow’s henchman Yanukovych and his sponsors in the Kremlin. Those events were followed by a chain of drastic developments: annexation of the Crimea, raging of extremism and separatism in the Eastern Ukraine and then Russian military incursion into Ukraine’s mainland. Russia’s aggressive actions have broken the European order, formed after the WWII, and jeopardized international security system.

Amidst these challenges Ukraine keeps on moving towards the EU. The country elected the new pro-European president and a new European-oriented parliament. A new government was formed. It mapped out so needed democratic and economic reforms, aimed at gaining a full membership in the EU in the future. The EU-Ukraine Association Agreement was signed. Ukrainians had chosen their path and paid a stiff price for it. Ukrainian people prove their right to be Europeans at the cost of lives of average Ukrainian men and women.

Neighbouring Russia has not accepted the choice of Ukraine. The Kremlin hasn’t rejected the idea to restore Soviet empire and expand its control over Ukraine. Russian leader characterized change of power in Ukraine as a coup d’état inspired from outside. President Putin accused the EU and the USA of planning to reshape traditional spheres of influence in the world and to undermine Russia’s strategic positions. Putin stated unequivocally that Ukraine is an area of Russian strategic interests and no political and economic arrangements with Ukraine can be acceptable without Russia’s participation.

European attitude towards developments in Ukraine is evolving too. The first reactions to the Maidan Square events were quite restrained. But when Russia annexed the Crimea and began to stoke unrest by pro-Russian separatists in the east and south of Ukraine it become impossible for EU to ignore violation of the Budapest Memorandum. Signing the Budapest Memorandum in 1994, Russia (together with the USA, the United Kingdom, France and China) granted security assurances against threats to use force against the territorial integrity or political independence of Ukraine. Kiev, in exchange, gave up the world’s third largest nuclear weapon stockpile. The USA, the United Kingdom and France were outraged by this breach of obligations to Ukraine, all the more, the Party of the Budapest Memorandum and the guarantor of security and independence was the violator. Russia set a dangerous precedent of foreign territories forced seizure and reshaping of internationally accepted borders. It has put under threat global security system and defamed the idea of nuclear disarmament.

Now Russia is waging a “hybrid” war against Ukraine; it is using a wide range of political, economic, military and communication means. Moscow came to a valid conclusion that “a pen is equal to a bayonet” long ago. Therefore, the Kremlin is intensively campaigning to manipulate public opinion inside the country and abroad. Russian media and the media, which are under Russia’s control, are distorting information about Ukrainian developments. The messages are stuffed by hypocritical expressions of sympathy with Ukraine and fake “facts” giving rise to hate and scorn for Ukrainians. The role of the USA and the EU in the events in Ukraine is distorted and grossly exaggerated by Moscow. It exerts itself to create the atmosphere of mistrust and misunderstanding between EU MS and between the USA and the EU. President Putin has affirmed that Ukrainian conflict is not the conflict between Ukraine and Russia, it’s even not the conflict between Russia and Europe, it’s a clash of Russian and American interests.

Russian leaders and Russian propaganda have still denied presence of the RF forces in the territory of Ukraine. They have stressed that Ukraine goes through an inner conflict between new Kiev authorities and population of some Ukrainian regions. They have depicted their own actions as disinterested aid to a suffering fraternal nation, whose sons and daughters are dying because a villainous government in Kiev doesn’t respect their right to speak Russian. The Kremlin prefers not to mention that separatists kill people with Russian arms; trained by Russian instructors they destroy buildings using Russian-made explosives; they even shot down civil aircraft with missiles launched from Russian anti-aircraft complexes. Moscow from time to time sends so called “humanitarian convoys” to rebellious regions. Moscow is its own master in this case. It doesn’t take into account real needs of the people. It consults with nobody, it coordinates its actions with no one. Nobody knows the contents of the cargos. No one can check veracity of invoices. Neither Red Cross organization nor OSCE mission have opportunity to control this aid distribution among civil population. That is why Kiev has every reason to state that Russia provides military supplies to insurgents. They do receive arms, ammunitions, fuel, food from Russia to be able to continue the war. One can easily observe a direct relation between “humanitarian convoy” arrival and aggravation of the conflict in the Eastern Ukraine. It’s an example of humanitarian aid which leads to humanitarian catastrophe. This year more than 1,5 Mio people in Ukraine have lost their homes and became displaced persons and immigrants.

Large Russian Army units (up to 10,000 men strong) deployed in close vicinity of Ukrainian border are also always ready to “help” a neighbour in need. Russia has already tested such assistance scenarios in Moldova (the Transdniestria conflict) and in Georgia (the Abkhazia conflict). The Kremlin wants to create a new frozen conflict to have a leverage to destabilize situation in Ukraine in the future.

Russia’s aggressive steps forced Europe to take tougher approach towards Moscow. The accident with Malaysian Boeing over Ukrainian territory, when nearly 300 people were killed, became a turning point in this context. The EU ventured to impose the third wave of sectoral sanctions, which have a real negative impact on Russian economy.

Ukraine together with the international community is developing the peaceful ways to resolve the conflict. Peace initiatives proposed by President Poroshenko were supported by UN, OSCE, NATO, the EU and Member States and the USA. They aimed at creating peaceful democratic state, where people enjoy equal rights, in particular the right to chose the language of communication.

Taking into consideration the scope of Ukrainian crisis and possibility of its expansion across Europe, international community should focus its efforts on forcing Russia to stop supporting separatists in the eastern regions of Ukraine. It’s obvious if Russia had withdrawn its troops and heavy armament from Ukrainian territory and stopped to back up separatists, the conflict in Ukraine would have been settled by itself.

Now Moscow is not ready to give up its ambitious plans and to put an end to separatists’ activity despite the sanctions imposed and rapid deterioration of economic situation in Russia. The Kremlin instead tries to blow the conflict; it has even resorted to a new tactics of subversive operations and terrorists attacks in the regions neighbouring to the conflict area. One cannot be sure that Russia will not want to provide the very same “assistance” to neighbouring European countries and to support national minorities by organizing explosions and shelling residential building, schools and hospitals.