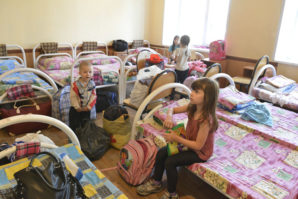 Pictured here: Ukrainian child refugees – probably orphans in camp in the other side of the Russian border.

According to Pravda news agency on November 5th, the Ukrainian artillery in the southeast of Ukraine “violated ceasefire regime 18 times”, the press center of the militia forces said. As a result of the shelling, two teenagers were killed and four others were wounded in Donetsk.

The children were reportedly playing football (soccer)  in the school yard, when then Ukrainian shells rained down and exploded around them.

“Two 120-mm shells exploded on a school stadium with a difference of a few seconds. The first one struck the school building, while the second damaged the football field. There were nine teenagers playing on the school stadium at the time of the shelling. Only three of them were lucky to avoid injuries. Two died on the spot – a school graduate and an eighth-grader; four were wounded.

Donetsk is mourning the killed children on November 6 and 7, the head of the government of the People’s Republic of Donetsk, Alexander Zakharchenko said.

Seventeen-year-old Vitali is one of the wounded children. The explosions injured his legs and the groin.

School No. 63 in the Kuibyshev district of Donetsk is a modern, recently built building. The school is located near the railway station and the airport of Donetsk. However, the school had not been damaged during the fighting before. Children would often go to the stadium to play football. The day before, the Ukrainian military shelled the entire neighborhood near the school. Four shells at once struck a residential building located nearby.

Two of the four injured teenagers are still in intensive care; doctors say their lives are out of danger.

A surgeon, who operated the injured children, said that the patients had severe shrapnel wounds.”