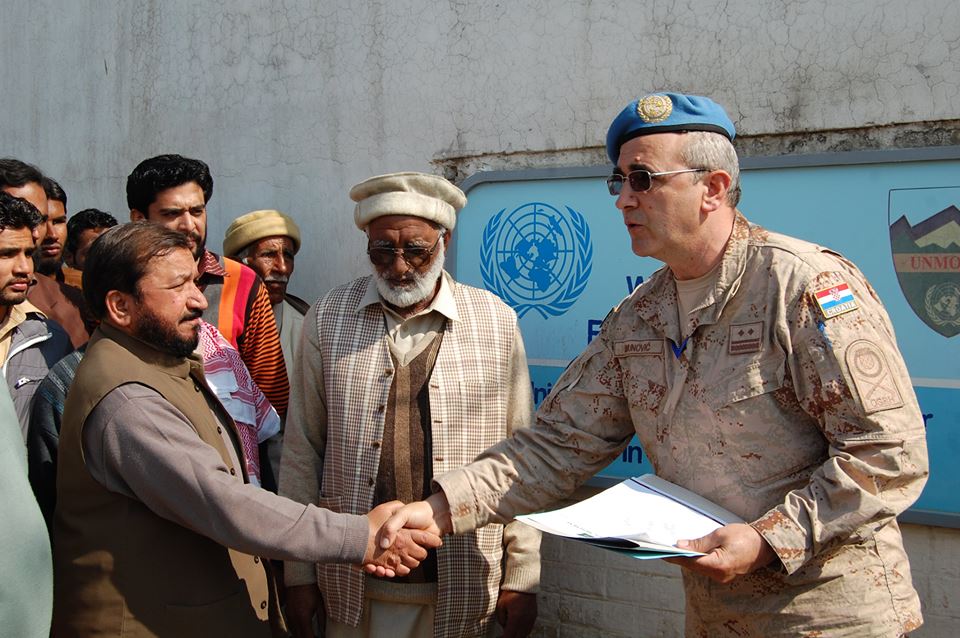 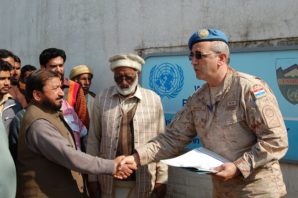 Hundreds of emotionally charged activists of Kashmir Freedom Movement (KFM) a pro-independence unionist political party and members of civil society participated in a rally in front of United Nations Military Observer Group for India and Pakistan (UNMOGIP) field office in in Bhimber, Azad Jammu and Kashmir.

The president of KFM Engr. Khalid Parvaiz Butt handed over a memorandum for UN Secretary General H.E. Ban Ki-moon seeking his direct intervention and help in persuading the Government of India to release the mortal remains of the two Kashmiri martyrs Maqbool Butt (Shaheed) and Mohammed Afzal Guru (Shaheed) from Tehar prison in Delhi, and to be handed back to their loved ones, so that they can repatriate and bury the martyr’s remains after proper religious rites in Jammu and Kashmir. 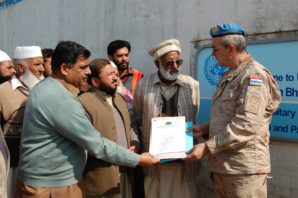 Maqool Butt, Kashmir’s most revered leader of the national inpendence movement and a former ‘prisoner of conscience’, who was awaiting trial of a politically motivated case against him for eight year was executed in haste without proper recourse to justice, on 11th February, 1984 and buried within the Tehar Jail, Delhi. In its 2008 report entitled, ‘Lethal Lottery; Death Penalty in India’, Amnesty International highlighted the missing record of his appeals in the Indian supreme court and expressed concerns that “no court judgements in his case are available”. A petition in high court seeking permission to remove his remains to his birthplace Jammu Kashmir was refused by India.

Enge. Khalid Parvaiz Butt said, “Similarly, once again disregarding UN General Assembly resolution 62/149 and resolution 63/168 that calls upon all states that maintain the death penalty to completely abolish it reminding that the use of the death penalty undermines human dignity and any miscarriage or failure of justice in the implementation of the death penalty is irreversible and irreparable. Indian Government has committed another “judicial murder” and executed Mohammed Azfal Guru on 9 February 2013 without providing him an opportunity to judicial review of his case.

He was awarded death penalty by Indian Courts to satisfy “collective Conscience” of Indian society rather than on available evidences, facts and other considerations.

His mortal remains were imprisoned and he was buried alongside Maqbool Butt (Shaheed) within Tehar Jail, Delhi.”

The memorendum for UN Secretary general presented to UNMOGIP officials in Bhimer today by the president KFM and members of the civil society states that the violtion of UN Security council resolutions on Jammu and Kashmir and continued disregard of UN General Assembly resolution 62/149 and 63/168 by Indian Government warrents urgent attention of the UN Security Council and UN Secretary General in accordance with article 98(2) and 99 of the UN Charter; 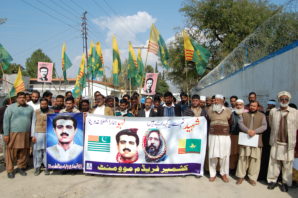 Hundreds of emotionally charged activists of Kashmir Freedom Movement (KFM) a pro-independence unionist political party and members of civil society participated in a rally in front of United Nations Military Observer Group for India and Pakistan (UNMOGIP) field office in in Bhimber, Azad Jammu and Kashmir.

The signatories to the memorandum Engr. Khalid Parvaiz Butt, Khalique Husain Advocate, Zafar Iqbal Dhamya, Khalid Hussain Khalid and others specifically asked “We would oblige to receive the acknowledgment of this memorandum and update on the follow up actions from the office of the Secretary General of the United Nations.”

Kashmir Freedom Movement (KFM) is a pro-independence unionist political party aims to empower the voices of the people and leading on national struggle for freedom, social justice, peace and reunification of the people and all the regions of the former state of Jammu and Kashmir.