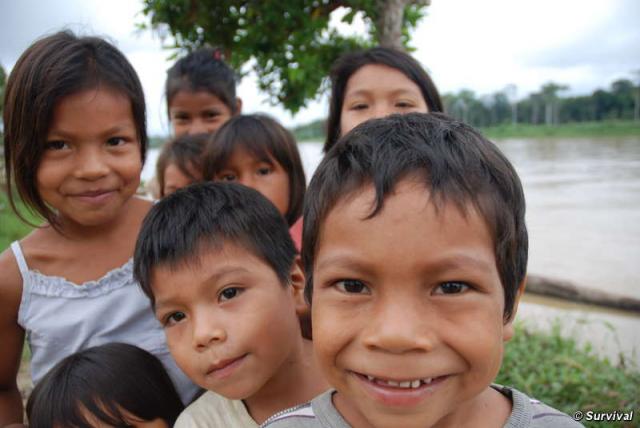 Oil giant Repsol-YPF could be threatening the existence of two of the world’s last uncontacted tribes, according to a damning new report by Survival International.

The Spanish-Argentine oil company has been targeted for its work in ‘Block 39’ in northern Peru, one of the most biodiverse areas on the planet.

More than 75 pieces of evidence have been collected showing the tribes’ presence in the region, including abandoned gardens, crossed spears and sworn testimonies of sightings.

But Repsol claims it is not enough to prove the Indians exist.

In the past, oil companies’ work in the Amazon has had catastrophic consequences for the uncontacted tribes who live there.

Both oil workers and isolated Indians often react violently if contact is made, and any disease brought by the outsiders could be fatal for the Indians.

Survival’s report, entitled ‘39 things Repsol doesn’t want you to know,’ will come as an embarrassing blow to the company as its AGM is being held in Madrid today and tomorrow.

Another company, Anglo-French Perenco, plans to build a pipeline from Block 67 inside Repsol’s concession, which will cut directly through the Indians’ land.

Repsol is working with US oil company ConocoPhillips, which holds a 45% share in Block 39.

Survival is calling for all three companies to immediately withdraw from the region.

Survival International’s Director, Stephen Corry, said today, ‘How many reasons do oil companies need to steer clear of uncontacted tribes? Denying they exist is the oldest trick in the book. Unfortunately it will be the Indians and oil workers deep in the Amazon forest who will pay the price.’

To read this story online: http://www.survivalinternational.org/news/7202