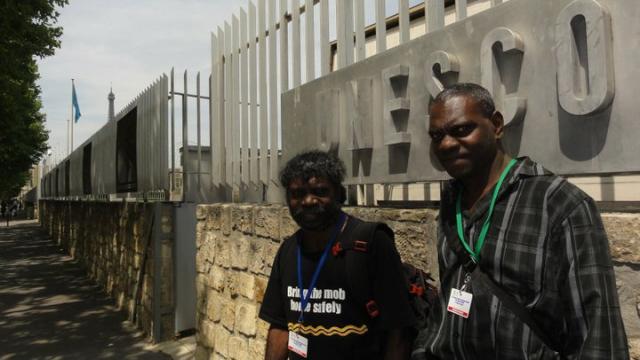 After struggling for more than 30 years to protect the Koongarra region from the threat of uranium mining, Kakadu Traditional owners can finally breathe a sigh of relief. On June 27 the World Heritage Committee announced that it would redraw the borders of the  Kakadu National Park to include Koongarra.

The 1,228 hectare region was originally excluded from the National Park in 1979, because of the uranium deposits there. Even though no mineral exploration ever took place, the possibility has remained a major concern to Traditional owners. Koongarra is the site of at least 50,000 years of Indigenous history and culture.

In its decision to modify the boundaries of Kakadu, the World Heritage Committee called on the government to assess the state of conservation in Koongarra and expedite the process of protecting it "as soon as possible, in collaboration with the traditional landowners of the property". The Committee noted that "the application of the Environment Protection and Biodiversity Protection Act 1999" will result in "an absolute prohibition of mining" in Koongarra.

Jeffrey Lee, the sole survivor of the Djok clan (Gundjeihmi) and Custodian of Koongarra, attended the 35th session of the World Heritage Committee in Paris, alongside representatives of the Mirarr.

"I would like to thank the World Heritage Committee for inscribing Koongarra, my country, on the World Heritage List. Thank you for talking about this and for listening to my words. I have waited a very long time for this to happen and it comes as a very happy feeling for me to see all of us looking after this place," said Jeffrey Lee, in a  statement addressed to the Committee.

"I am supported by all the Bininj clans of Kakadu and most particularly by neighbouring clans such as the Mirarr People, through their representative body the Gundjeihmi Aboriginal Corporation, representatives of which are here with me at this meeting," continued Lee.

"I want to ensure that the traditional laws, customs, sites, bush tucker,trees, plants and water at Koongarra stay the same as when they were passed on to me by my father and great-grandfather. Inscribing the land at Koongarra as World Heritage is an important step in making this protection lasting and real."

The Mirarr also took a moment to thank the Committee and honour Lee’s tireless efforts. "Jeffrey speaks for his country and we support him. He has always said no to mining at Koongarra. He wants to see that country protected as a part of Kakadu and we absolutely support him in that."

"Kakadu is Aboriginal land, Australia’s largest National Park and one of the world’s valued places. This decision is a key step towards seeing the bipartisan election promise of Koongarra’s protection realized. The Mirarr are actively committed to supporting Mr Lee in speaking for his country."

Australia Federal Environment Minister Tony Burke  took a moment as well, to celebrate the decision and congratulate the Traditional Owners.

One group that didn’t get any praise–and rightfully so–is the Paris-based nuclear energy giant AREVA. The company, who has a mineral lease in the Koongarra area, tried to stop the Committee from considering the request to expand the National Park. Fortunately, the federal Labor party rejected the company’s request.

While Koongarra is one step closer to being secured from the likes of AREVA, the London Mining Network observes that Rio Tinto is still planning to expand its operation at the huge Ranger deposit, which is inside Kakadu.

The Ranger mine has been wrought with troubles ever since it went into operation in 1981. According to the Environment Centre, "over 100 environmental errors and breaches of operating codes have been recorded" since then. The mine has been particularly plagued with water management problems, which a major concern for the Mirarr, since "some 12 million litres of radioactive contaminated water lies on site at the Ranger Uranium Mine, upstream of Indigenous communities and internationally recognized Ramsar listed wetlands," explained Mirarr Elder Yvonne Margarula in her letter to UN Secretary-General Ban ki-Moon.

"The ongoing operations at Ranger, combined with renewed pressure for expansion, threaten the natural and cultural values for which Kakadu is listed as World Heritage," said Justin O’Brien, executive officer of the Gundjeihmi Aboriginal Corporation.

In addition to their concerns with the Ranger mine, the Mirarr people are still eager to see the government bring the nearby Jabiluka uranium deposit into Kakadu, like it has done for Koongarra.

Exploitation of the deposit was halted in 1998, following an eight-month blockade by thousands of indigenous and non-indigenous protesters.

The company eventually signed the "Jabiluka Long-Term Care and Maintenance Agreement" which guaranteed that the Mirarr would have veto rights over any future ‘development’ at Jabiluka. Even though the agreement is reassuring, the Mirarr want to take it one step further by permanently securing the site.

John Schertow is the Editor of Intercontinental Cry, and a correspondent at the Public Good Project