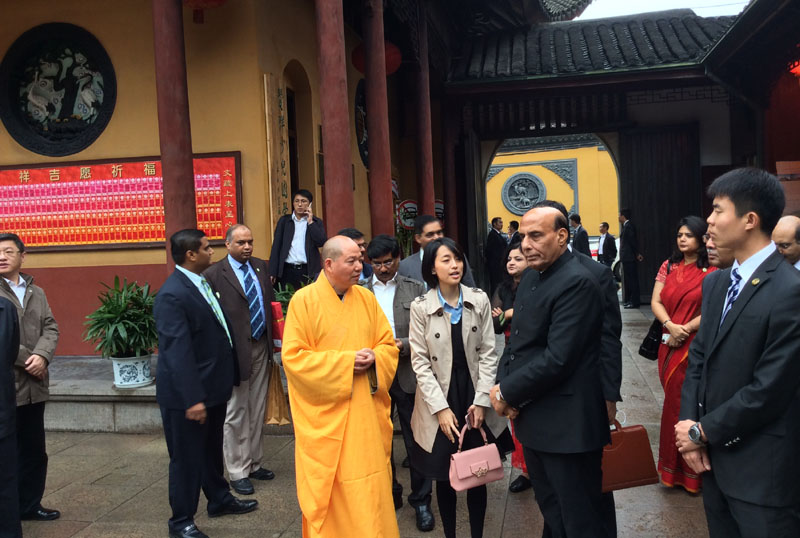 Shanghai (PIB-GR-TYP-BIN): The Union Home Minister Mr. Rajnath Singh visited Shanghai, China from November 21-23, 2015 as part of his ongoing visit to China. He was accompanied by the Vice Minister of Ministry of Public Security, Mr. Chen Zhenmin throughout the Shanghai leg of the visit.

Mr. Rajnath Singh met the Mayor of Shanghai, Mr. Yang Xiong earlier today who also hosted a banquet in honour of the visiting Home Minister of India. During the meeting with Mayor of Shanghai, Mr. Rajnath Singh appreciated the efforts of the Shanghai Municipal Government to establish the city as a leading global financial, economic, trade and transportation hub with particular focus on innovation and technology. Both sides also discussed ways to further institutionalize annual exchanges as part of the sister city relationship with Mumbai, in particular strengthening of exchanges between the police forces of Shanghai and Mumbai.

The Union Home Minister also visited the Shanghai Public Security Bureau’s (PSB) Central Command and Control Center, which is the largest single unit to respond to emergency calls, monitor traffic and manage rescue drills. He also paid a visit to the Jade Buddha Temple and extended an invitation to the Chief Abbot to lead a delegation of Buddhist monks to India next year. Mr. Rajnath Singh also visited the Pudong Free Trade Zone and was given a detailed presentation on how FTZ’s have attracted foreign investments in Shanghai in IT, innovation and knowledge sharing sectors.

Earlier on November 22, 2015, Mr. Rajnath Singh addressed a gathering of Indian community in Shanghai at the Infosys premises in Zhangjiang Hi-tech Park. Indians from Suzhou, Shaoxing, Yiwu and Keqiao had also joined in the interaction organized by the Indian Association of Shanghai. He lauded the contributions of the Indian community in the Eastern China region in further deepening India China bilateral trade and economic relations. He also called upon them to encourage Chinese companies to take part in ongoing infrastructure development projects including in the Make in India campaign, which could then be transformed to its next level of “Scale Up India”.

The Union Home Minister also visited the China Arts Museum on November 22, 2015 and viewed the ongoing exhibit of largest ever Indian arts to visit China, i.e. “Forms of Devotion”, which will remain on display in Shanghai till mid February 2016 as part of the India Culture Week launched earlier this month. He also visited the site of the founding of the Communist Party of China in Shanghai, along with a visit to a nearby police station in Xin Tian Di which functions as a ‘paperless’ sub-bureau of Shanghai PSB.

As a special gesture, Mr. Rajnath Singh was received and seen off at the time of arrival and departure by the Vice Mayor of Shanghai, Mr. Bai Shaokang, who is also in-charge of the Public Security Bureau in Shanghai.