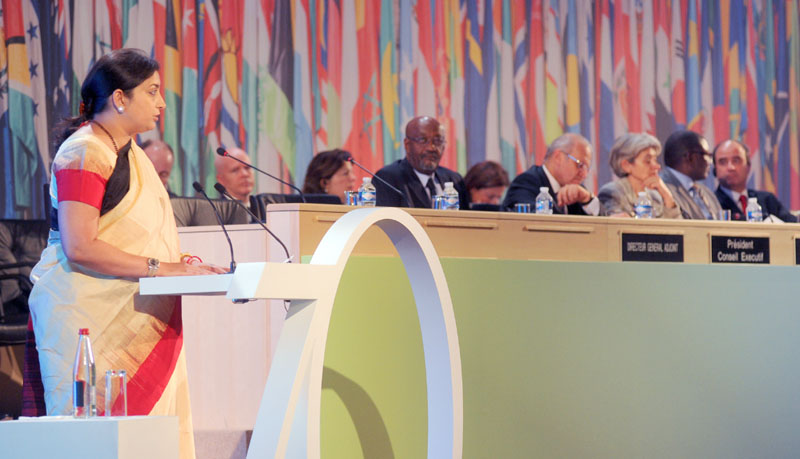 Paris (PIB-GR-TYP-BIN): The Minister of Human Resource Development Mrs. Smriti Irani reaffirmed India’s commitment to the ideals of UNESCO and to furthering its role and activities. In this context, she recalled the words of Mahatma Gandhi when in 1947 he had expressed the deep Indian interest in the efforts of UNESCO to “secure peace through educational and cultural activities”.

The Minister of Human Resource Development Mrs. Smriti Irani is on an official visit to UNESCO Headquarters, Paris in connection with its high level segment ‘The Leaders’ Forum’ on 16-17 November 2015. Her visit is coinciding with the ongoing 38th session of the UNESCO General Conference as well as the 70th anniversary celebrations of UNESCO.

The Minister also highlighted recent pioneering initiatives on education undertaken by the Government of India. India’s efforts are aimed at opening the windows of opportunity of education to all its citizens. To this end, India offered to partner with UNESCO towards collaborative knowledge sharing, which would assist all countries in their efforts towards achieving Agenda 2030 in a timely manner.

The Minister also held a meeting with the Director General of UNESCO, Ms. Irina Bokova, to discuss the full range of India’s cooperation with the organization across UNESCO’s programmes on education, science, culture, and communication and information. As a founder member, India’s is a voice that is heard with much respect at UNESCO.

The Minister also paid homage to the statue of Shri Aurobindo located in the Japanese garden at UNESCO headquarters. The statue is a gift from the Government of India to the Organization as its tribute to the House of Peace.

The Minister was received at The Leaders’ Forum by the Director General UNESCO Ms. Irina Bokova alongside the Namibian Presidency of the General Conference and the Egyptian Chair of the Executive Board. Several Heads of State and Government are attending this Forum which will today see an intervention by President Francois Hollande of the host country, France.