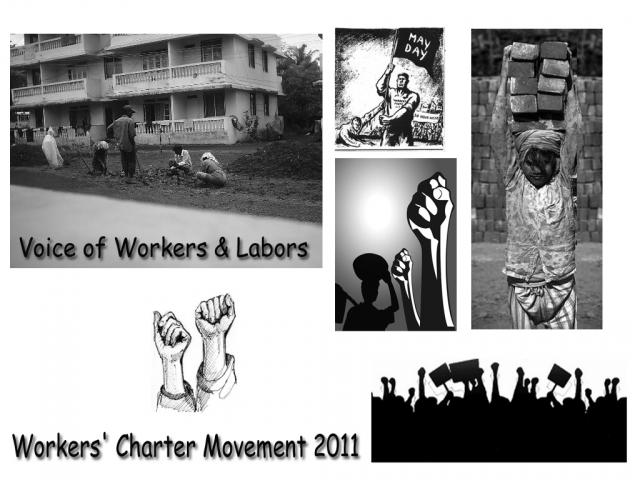 Likes such, in India Labors and workers have voiced in to fight for their rights. This coming May  1, 2011 as a symbol of Unity, workers and labors  from all over  India will join together to present the charter of their demands before parliament of India to implement all labor laws for contract workers who are the majority of total work forces in India.

Raj Kumar a Blogger and enthusiast says , “In last one year I have visited to many worker areas in Delhi and Gurgaon, and it was very surprising for me that workers who are pushed in these areas are the majority, and they are forcibly deprived from every development and progress on which whole nation is running. These poor people work in factories, in service industries, in car production companies, in cloth making companies, in coal and metal mines, and provide everything for the progress, which is present all around us, and whatever we all us use in our daily life. But, they themselves never get anything in return of their hard work, and remain in worst living conditions with only food for two times which is also only that much so that that they can go to work next day.”

“I want all justice loving people to come in the support of Workers’ Charter Movement, because we all should have respect for those who make food, cloth, books, houses and all other things we see around us.  Present TV Channels and Newspapers which were promoting the movement for ‘Lokpal Bill’, whole day and whole night that same news media will never promote these justified demands of the workers. So, as a part of the society everyone must join the workers to strengthen them to put their demands before the parliament of India, and come on Jantar Mantar, New Delhi on the International Labor Day (1st May 2011). If we think that this is really justified demand of the Indian Workers then must promote these demands among our friends and social circle and ask them to come and join the working people. It is a time to raise your voice in the support of workers’ demands, for those who are providing us everything,” added Raj Kumar.

To see the complete Charter of the Workers of India visit the link: http://www.workerscharter.in/

Raj Kumar can be contacted through his blog http://www.sparkofchange.blogspot.com

Filed under: Opinion, Politics
Share Tweet Pin G Plus Email
previous article: At least an honest opponent of the RKBA
next article: Reliance Trends to spin with ‘Spinner by Shane Warne’