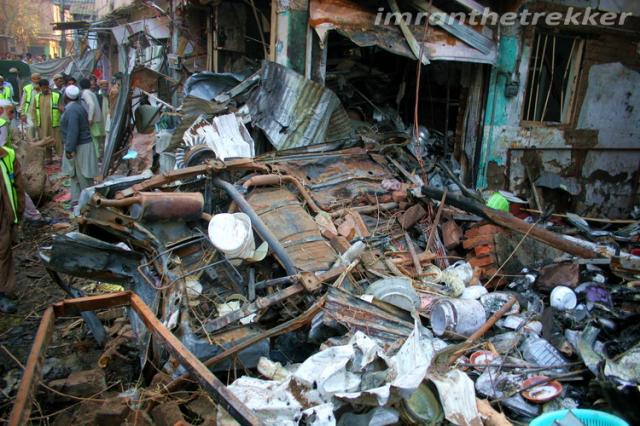 Peshawar,N.W.F.P: Some unknown insurgents attack the supply terminal of the NATO Trucks, outside Peshawar city.

Some 200 assailants surrounded the supply terminal at 3:00 AM in the morning, carrying light and heavy arms, attacked the trucks parked in the terminal, with rockets and a fire broke out soon after the attack that burnt everything to ashes and at the time of attack some 250 trucks were there those had to carry logistics for the NATO and US forces, stationed in Afghanistan.

The terminal that is located at Pishtakhara, the entrance of Khyber agency (tribal areas) and wherefrom these trucks take the containers to Afghanistan through the famous historical passage of Khyber pass and Torkham border.

The onset of these attacks came as a response to the pilotless US drone attacks in most parts of the tribal belt of north western Pakistan, against the suspected Taliban and Al-Qaeda insurgents that ignited the hatred in the hearts of the local tribesmen, because these drone attacks have killed most of the civilians in the area.

In a similar attack last week, three rockets were fired from some unknown point that targeted 3 containers and killed one man and injured several.

Pakistan president and other officials from the establishment have condemned these drone attacks and termed them an open violation of the sovereignty of a democratic country and also warned the US government that these attacks may harm the support of the war on terror.