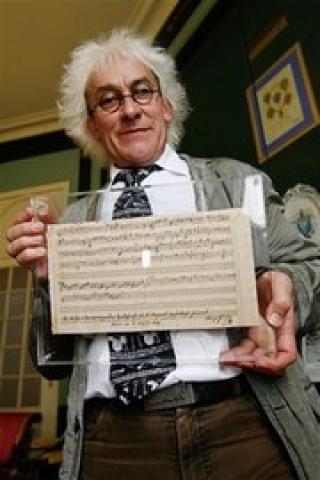 It’s a forgotten melody, sketched in black ink in a swift but sure hand. The single manuscript page, long hidden in a provincial French library, has been verified as the work of Mozart, the apparent underpinnings for a Mass he never composed. The previously undocumented music fragment gives insight into Mozart’s evolving composition style and provides a clue about the role religion may have played for the composer as his life neared its turbulent end, one prominent Mozart expert says.

A library in Nantes, western France, has had the fragment in its collection since the 19th century, but it had never been authenticated until now, partly because it does not bear Mozart’s signature.

"His handwriting is absolutely clearly identifiable," he added. "There’s no doubt that this is an original piece handwritten by Mozart."

Leisinger said the work had been "entirely forgotten." Such a find is rare: The last time unknown music in Mozart’s handwriting came to light was in 1996, when a portion of an aria was sold at Christie’s, Leisinger said.

The library does not plan to sell, but if it did, the single sheet would likely be worth around $100,000, the expert said. In all, only about 100 such examples of musical drafts by Mozart are known.

There have been up to 10 Mozart discoveries of such importance over the past 50 years
The sheet was bequeathed to Nantes’ library by a collector in the 19th century, along with one letter from Mozart as well as one from his father. Both the letters were published in Mozart’s complete correspondence, said Agnes Marcetteau, director of Nantes’ municipal library.

Mozart had planned to become the choir and music director of Vienna’s main cathedral, although he died before he could take up the post. But because Mozart had become a Freemason, some have questioned the sincerity of his interest in religious composition at that period of his life, Leisinger said.

Mozart’s famous Requiem, unfinished at his death, was commissioned by a mysterious benefactor. But the rediscovered fragment likely stemmed from inspiration alone and suggests "to a certain degree that being a Freemason and a Roman Catholic was not a real contradiction" in Mozart’s eyes, Leisinger said.

Musicians must work out the key signature and clef based on other clues in the music. The tempo is also mysterious. And there is no orchestration.

"It’s a melody sketch, so what’s missing is the harmony and the instrumentation, but you can make sense out of it," Leisinger said. "The tune is complete."