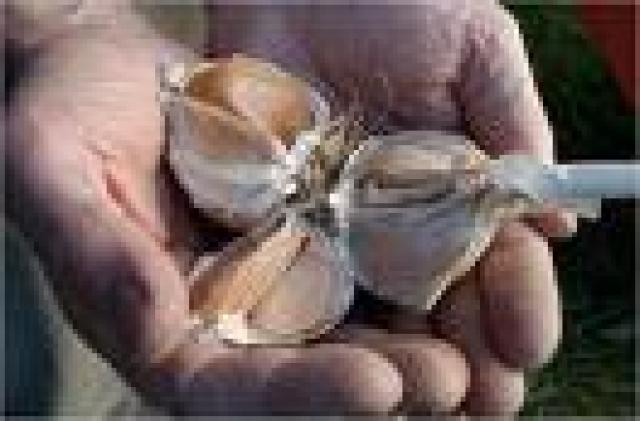 Garlic has long been touted as a health booster, but it’s never been clear why the herb might be good for you. Now new research is beginning to unlock the secrets of the odoriferous bulb.

In a study published today in the Proceedings of the National Academy of Sciences, researchers show that eating garlic appears to boost our natural supply of hydrogen sulfide. Hydrogen sulfide is actually poisonous at high concentrations — it’s the same noxious byproduct of oil refining that smells like rotten eggs. But the body makes its own supply of the stuff, which acts as an antioxidant and transmits cellular signals that relax blood vessels and increase blood flow.

The power to boost hydrogen sulfide production may help explain why a garlic-rich diet appears to protect against various cancers, including breast, prostate and colon cancer, say the study authors. Higher hydrogen sulfide might also protect the heart, according to other experts. Although garlic has not consistently been shown to lower cholesterol levels, researchers at Albert Einstein College of Medicine earlier this year found that injecting hydrogen sulfide into mice almost completely prevented the damage to heart muscle caused by a heart attack.

“People have known garlic was important and has health benefits for centuries,’’ said Dr. David W. Kraus, associate professor of environmental science and biology at the University of Alabama. “Even the Greeks would feed garlic to their athletes before they competed in the Olympic games.’’

Now, the downside. The concentration of garlic extract used in the latest study was equivalent to an adult eating about two medium-sized cloves per day. In such countries as Italy, Korea and China, where a garlic-rich diet seems to be protective against disease, per capita consumption is as high as eight to 12 cloves per day.

While that may sound like a lot of garlic, Dr. Kraus noted that increasing your consumption to five or more cloves a day isn’t hard if you use it every time you cook. Dr. Kraus also makes a habit of snacking on garlicky dishes like hummus with vegetables.

Many home chefs mistakenly cook garlic immediately after crushing or chopping it, added Dr. Kraus. To maximize the health benefits, you should crush the garlic at room temperature and allow it to sit for about 15 minutes. That triggers an enzyme reaction that boosts the healthy compounds in garlic.

Garlic can cause indigestion, but for many, the bigger concern is that it can make your breath and sweat smell like…garlic. While individual reactions to garlic vary, eating fennel seeds like those served at Indian restaurants helps to neutralize the smell. Garlic-powder pills claim to solve the problem, but the data on these supplements has been mixed. It’s still not clear if the beneficial compounds found in garlic remain potent once it’s been processed into a pill.