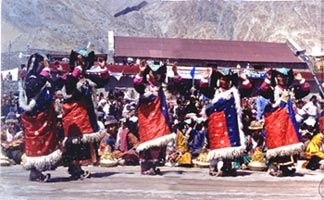 It lies at altitude range from about 2,755m to 7,674m. It can be Cold as -21 Degrees in Winter season, and temperature rises upto 25 Degrees in Summers which are comparatively very short to other Northern Parts of India.

Ladakh is surrounded by world’s two Longest mountain ranges the great Himalayan and the Karakoram, It lies athwart two others The Ladakh and the Zangskar range.

Ladakh Marks a great impression on the travelers the moment they enter Leh. The Friendliness of the people, their way of dressing and Language are same as Tibetan and then Indian. The from Kullu and were the first population immigrants to Ladakh as shepherds’ nomads and settled down near . After that drads and others Settled in to Lower regions of Ladakh. Suitable to cultural and geographical resemblance Ladakh is admired among tourists as small . Buddhism is the major religion in Ladakh while Kargil district is dominated by Muslims and Buddhist. The loom to Ladakh is always marked with many walls that are long upto 2 to 3m, festooned with imprinted stones with the mantra "Om Mani Padme Hum" and Chortens which reminds Buddha’s mind. The Villages and Mountains are ornamented with gonpa or monastery residing thousand of Buddhist monks.

Muslims came to Ladakh from Middle of Asia in 15th century AD. Although Muslim population is very less in Ladakh and more in Drass.

A major polo tournament called the "Ladakh Festival Cup" is also held as part of the festival in which polo teams from different parts of the region participate. Visitors to Ladakh during this period will have the opportunity of witnessing this ancient sport of the western being played in its original, wild style with fewer rules and frenzied crowd involvement. Yet another interesting programme is the staging of a typical Central Asian trade mart in Leh Bazaar, complete with caravans laden with traders’ goods, while skilled artists dressed in period-costumes play the role of merchants engaged in trading, bartering and associated activities.