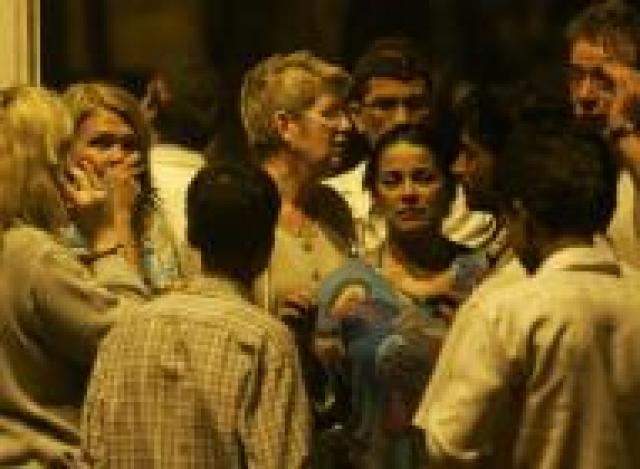 Mumbai, India (GroundReport) – The terror attacks in Mumbai has continued into its 20th hour after the onslaught of carnage and chaos started at approximately 9:45 pm Wednesday local time.

As the situation stands at 4:10 pm in India, police are still in pursuit of the terrorists, who are supposedly from Turkey. Most of the hostages held are believed to be passport holders of the U.S. and U.K.

Although the Deccan Mujahideen, it is yet unclear as to the nature of these attacks. The extremists targeted several hospitals, a historic railway station and several luxury hotels. Some of the hostages held are also believed to be Israelis, and there is believed to be a Jewish connection. However, new reports say that the Jewish community in India is quite small.

Indian news reports say that 5 of the terrorists have been killed in the standoff along with several key anti-terror and police officials. India has come under fire in the wake of the attacks as the Navy was unable to detect the terrorists from entering the country via its water ways into the Taj Mahal hotel in Mumbai.

The fact of the matter is Indian security officials are dumbfounded by the surprise attack, and there is no real plan as to dealing with the catastrophe. The official death toll is 103, with some news reports suggesting a number as high as 107. More than 300 people are believed to be injured.

The terrorists are thought to have used AK47’s to fire at people at a Mumbai railway station. The rifle, which has a 400-meter point blank range was also used to kill the chief of the anti-terror squad in India, who took 3 bullets to the chest. One police official is thought to have been killed by bullets that went through his protective helmet. The use of such weapons and ammunition underscores the planning and precision which these attacks occurred.

The random gunfire at the CST railway station is believed to have been a decoy before the terrorists targeted several other locations in Mumbai. Some reports cite that there is a Pakistani link.

The country has been hit by a spate of chain bombs in recent weeks with the most recent ones taking place in Assam, killing as many as 80 people. The events unfolding in Mumbai bring back memories of a previous attack that rocked Mumbai rail stations on July 11,2006.

Emerging news reports suggest that six blasts have been heard in the Trident Hotel so far, where 40-50 hostages are believed to be held.

As I write this, a massive blast has been reported at the Taj and the army is getting ready to storm the Taj hotel to end the siege by the terrorists (4:32 pm). This could very well end an episode to a very long and intensive struggle as the army takes a more forceful position to bring the terrorist threat to an end.

NSG commandos are believed to have been injured, and the Indian army has reportedly taken over the situation. The police will be providing cover for rescue operations to continue. Reports cite that, nonetheless NSG commando operations are "still on."

Meanwhle, the Prime Minister Manmohan Singh and the opposition leader, Mr. L.K. Advani have cancelled plans to visit the site of the attacks, due to security threats.