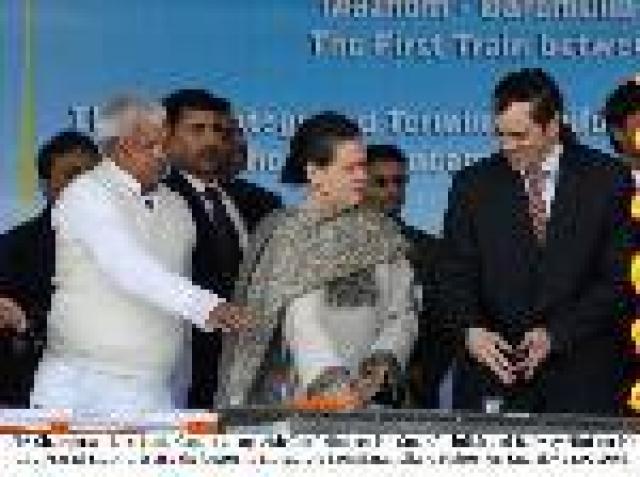 Srinagar, February, 14 – UPA Chairperson, Sonia Gandhi has said that the people of Jammu and Kashmir by their massive participation in the just-concluded Assembly elections have sent a clear message to the world that peace and democracy were the only ways to achieve development, adding that those espousing separatism should take a lesson from it and follow the democratic path.

Addressing a well-attended function held on the inauguration of the new integrated terminal building of the and operation of the first international flight from here today, the UPA Chairperson said the overwhelming enthusiasm shown by the electors in was reflective of their strong faith in democracy. She said the road to prosperity is possible only through peace and democracy. There was no other means to achieve this, she added. She said that people who do politics of violence, whether in or elsewhere in the country and belonging to any faith, were not well wishers of . She said these elements could not deceive people who can see through their designs.

Mrs. Gandhi said that the day marked arrival of 3 new gifts for including new integrated terminal building, rail from Mazhom to Baramulla and first international flight from . She said operation of international flights would add to new opportunities for employment and business and congratulated the Civil Aviation Minister Mr. Praful Patel and Airports Authority of India for achieving this milestone. She also expressed hope that rail link to Baramulla would add to the socio-economic development of the State and felicitated the Indian Railways for the feat.

The UPA Chairperson said that during the last several years, much progress has been registered in various sectors in . She made a special mention of the keen interest and support extended by the Prime Minister, Dr. Manmohan Singh in the development and prosperity of the State. She said though significant strides have been made in various walks of life in the State, yet many things were to be achieved. “For this, all of us have to work together”, she said, adding the pending projects have to be accomplished and new ones taken up.

Mrs. Gandhi said that when the entire world was going through economic recession, was not facing much of its impact and described the policies of the Government as the main reason behind it. She said prices of diesel, petrol and LPG were reduced to provide succour to the people. She said the Government was committed to better the lot of the people.