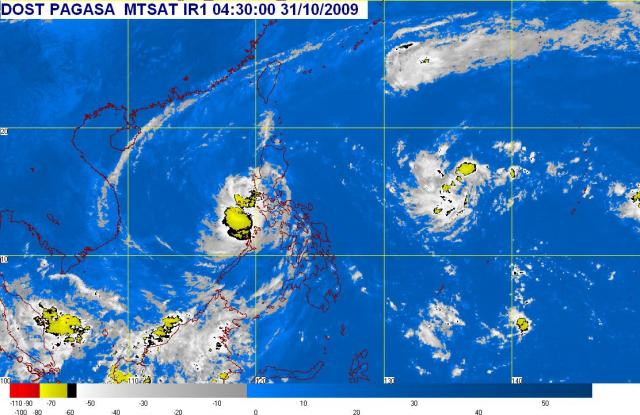 Media reports say at least a dozen people have lost their lives in flood waters that swelled rivers just south of the capitol region of manila due to tropical cyclone Santi (Mirinae) and at least 28 area are flooded south of Manila.
VIDEO: Overflow of Sta. Cruz River submerged 85% of Sta. Cruz town. 6 ft. at Brgy San Pablo Norte; waist-deep at Brgys Santisima Cruz and San Pablo Sur; leg-deep at Brgy Inang-Awa
UPDATES: NDCC report information:
The Philippine National Disaster Coordinating Council confirmed 10 fatalities and identified them the majority died from flood related accidents, four people are missing and feared dead – but rescuers are still searching and holding out hope to find the missing-  while authorities say 2 were hospitalized.
Meanwhile power is still out in several areas; the largest distribution network in the Philippines, the Manila electric company says they hope to restore power by Sunday evening to areas in or near capitol region affected.

· Olla Bridge near Grotto, and bridge at the boundary of Magdalena and

· Road going from Lumban to Sta. Maria and Pangil not passable due

· National Road from Brgys Pansol, Bucal to Halang, Calamba not

· Roads in Pagsanjan, Mabitac and Famy underwater; not passable to

· Bridge of Promise connecting Gulod labor and Kumintang Ibaba of

· Brgy. Maligaya (Atimonan) road not passable due to overflowed river

poles in Paracale, Labo, Vinzons, Basud; and by a landslide in Sitio

– 23 out of 60 MERALCO circuits reenergized

· No power in Gen. Nakar, Alabat Island, Real and Infanta

· No power in Morong, Baras and Talim Island

Quezon City; and, Brgy Rincon, Valenzuela City due to damage to power lines and transformers

monitoring in the area of Pasig City

– MDCC Lubang readied 13 elementary and 3 high schools which can

at Kanlanka Spillway due to strong current of floodwater; no reported

casualty; rescue operations will be done utilizing equipment from

that fell along Maharlika Highway that resulted to heavy traffic between

In Brgy Cupang, Muntinlupa, one (1) shanty located along the creek with occupants, was swept away by the current. BFP was able to rescue the two (2) children and presently conducting SAR for the missing father (body of father recovered children still missing)

Earlier report:
Santi, as the storm was named in the Philippine area of responsibility has weakened into a tropical storm
Now a tropical storm, but expected to increase in power anew, Mirimae, is moving towards Vietnam and expected to make landfall there in 24 hours per the US Navy & Airforce JTWC
(Joint Typhoon Warning Center)
The Typhoon’s eye is over the south China Sea Saturday early evening and is moving fast towards the west at 20kph.

In Brgy Cupang, Muntinlupa, one (1) shanty located along the creek with occupants, was swept away by the current. BFP was able to rescue the two (2) children and presently conducting SAR for the missing father (body of father recovered children still missing)

A woman was recovered alive but two of the other occupants of the car are missing along with the white Honda Civic they were riding in. Reports estimate several homes were destroyed in Quezon Province. At least one sea wall was damaged.  Flooding hit the southern part of Metro Manila and areas along Laguna De Bay.

Meanwhile in reports overnight many parts of metro manila suffered from power blackouts as powerlines were damaged by the storms high winds that swept over the capitol  region. The storm came as close as 50 km from Metro Manila and hit many of the mega city’s suburbs to the south of the capitol affecting mostly Quezon, Laguna, and, Batangas provinces.

Also hard hit was the northern section of the Bicol region in particular Camerines Norte and Catuandanes.

Floodings were reported in the following areas:

Parañaque – Libjo area at the back of NAIA, Multinational Village (knee deep)

In other areas reports are affected as communication has been affected in areas where winds damaged or shut down power when power lines grounded out when objects hit lines. Several major power transmission posts were also affected and damaged.

Maharlika Highway between Labo and Daet is one lane passable; ongoing clearing and removal of fallen trees caused by strong winds.

Inalmasinan Road Section is impassable due to flooding

Power outage in Camarines Norte except in Daet as a result of preemptive measures undertaken by the National Electrification Authority (NEA) due to some damages along backbone lines. Assessment on the extent of damage is ongoing.

SMART and GLOBE at Panganiban, Camarines Norte and SMART at Sta. Elena – no signal