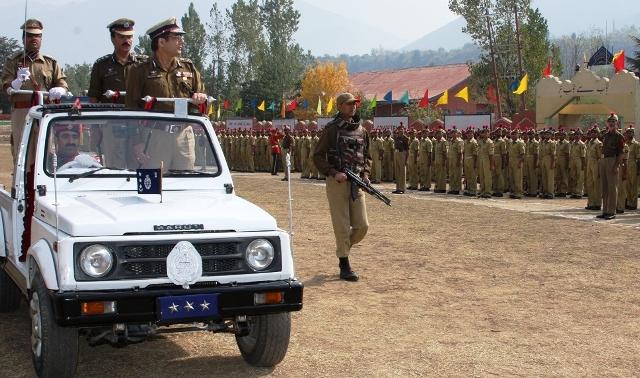 , October 20 (Scoop News) –    The Director General of Police (DGP),  Kuldeep Khoda has said that Police is strengthening its training infrastructure to train the personnel in modern techniques of professional policing. He said that up-gradation of all Police training institutions in the state is in offing and the training syllabus as per the latest requirements has also been implemented for various courses.

Khoda said this after inspecting a colourful parade of 838 police trainees at Police Training School Manigam today. He said that Police is sharpening the training skills of its personnel to meet the challenges posed by the criminals. He said that in the present scenario the latest training in the field of crime control, mob controlling without using lethal weapons, cyber crime, fake currency detection and respect towards Human rights has assumed much importance and all these things have been kept in mind while framing new syllabus for the trainees.

The DGP expressed his satisfaction on the working of the training school and said that due to the efforts of the principal and the staff, the institution has been making progress day by day. He asked them to continue their efforts in bringing the institution on modern lines of training. The Police contingents demonstrated the skills of training, they are being imparted. Interacting with the trainees he stressed upon them to serve the people with more dedication and adopt people friendly approach while dealing with the law breakers and violence mongers. He said that JKP has always worked for the betterment of the people and the force is hopeful of scaling new heights in the service of the nation with the cooperation of the people.

Referring to the role of JKP in dealing the emergent situations, DGP said that the force has always faced these situations with valour and bravery. He stressed upon the trainees to acquaint themselves with the latest methods of policing as they had to come across different situations after passing out from the institution. He said that the organisation has been under taking various schemes for the welfare of the police personnel and their families, and the procedures have now been eased to benefit the personnel under these schemes.