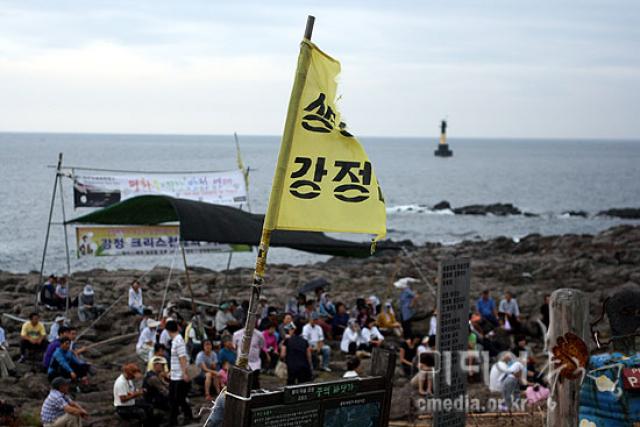 ALL EYES ON JEJU ISLAND

On November 18th, tomorrow, the government in Seoul – abusing the South Korean Navy under their orders – wants to blast Gureombee, the world-famous volcanic rock along Jeju’s Southern coastline belonging to Gangjeong village where the local people have been resisting day and night for now almost 5 years and demand to stop the building of a naval base, which also would see USAmerican naval vessels with nuclear weapons be stationed.

Please take 5 minutes to be part of this global collective effort to stop this destructive blast, which also would be a blast against national and international law as well as against world peace, crush local needs and traditions under military boots but also would destroy the pristine environment as well as the cultural heritage of the Jeju people forever.

Jeju, an autonomous province, was recently selected among the New Seven Wonders of Nature, which with its UNESCO triple-crowned status lists the island among the world’s most precious cultural and national treasures. In addition, the marine ecosystem that lines Gureombee is an absolute preservation area designated by the South Korean government because of the many endangered species that inhabit this pristine ecosystem, including soft coral and the red-clawed crab. The spring water that bubbles up from the volcanic rock provides up to 80% of the drinking water for all residents of Seogwipo City, the southern half of Jeju Island. The destruction of Gureombee threatens the surrounding marine life and the clean water that farmers and villagers depend upon for their survival.

Please send also an e-mail to the Secretary General of the United Nations Ban Ki Moon, who – himself a South-Korean – actually holds the supreme military command for South Korea in his hands.

All Gangjeong villagers are pleading for your help to prevent the Gureombee blast at whatever cost. Your contacting the Governor now will not only encourage them but also help save their village and lives. As one villager says, “Gureombee is Gangjeong, Gangjeong is Gureombee. We are One.”

STOP the BLAST ! STOP the BASE ! FREE INDIGENOUS DETAINEES !

You have the power to stop the blast of Gureombee, a government-designated absolute ecological preservation area. You also have the power to order the South-Korean Navy to stop the construction of the naval base and to release innocent citizens from detention.
Will you leave behind a legacy of overseeing the destruction of a UNESCO preserved site and ancient Korean relics, or will you be remembered as a protector of democracy and peace on Jeju Island?
Please uphold your promise to those who elected you and stop the blast and construction immediately. We don’t want the ‘New Seven Wonders of Nature’ to be brutally destroyed and be replaced with something which only can serve war.

You said yourself: "World military spending has now risen to over $1.2 trillion. This incredible sum represents 2.5 per cent of GDP(global gross domestic product). Even if 1 per cent of it were redirected towards development, the world would be much closer to achieving the Millennium Development Goals…. I believe in a world of justice and human rights for all."

Now, here and today you have an opportunity to show to the world that you mean what you say, because until April 17, 2012, you as Secretary General of the United Nations are technically the top of the chain of command and head of the still functioning UN Command in charge of all forces in South Korea. Thereby you are also in command of the South-Korean Navy.

Please order them today to stand down and leave Jeju Island in peace.

Please stop any military action on Jeju and prevent the destruction (planned for tomorrow, the 18. November) of Gureombee – the world famous "Cloud-Rock" with its many ecological, cultural and economic functions important for the well-being of the Jeju people and their natural marine and island ecosystems. Please also help to free innocent detainees and instruct UNESCO and UNEP to stand up against the wanton destruction of the natural and cultural heritage of these indigenous people on Jeju Island and protect their rights as well as endangered species of the pristine marine and island ecosystems.

Nature protected you when you fled with your family to the remote mountainside for the duration of the Korean War, so now please help the Jeju people and especially the Gangjeong-do villagers to protect their nature and maintain peace.

—
please send copies of all your letters in CC to president@president.go.kr
and in BCC to office[At]ecoterra-international.org
—

* FREE THE JEJU THREE
See: http://www.fpcn-global.org/en/system/files/%252Fhome/fpcn/files/drupal/save_jeju_island_oct_2011.ppt
Free the three peace activists who have been in prison for the past 82 days. They pose no threat to the community, will not flee from their home and therefore, there is no need for them to be locked up in detention . They are:

* SAMSUNG and HYUNDAI corporations are set to be instrumental for the planned destruction, if the ill-conceived attempt is not stopped now. Please prepare for a global boycott of their products. We need to do all to stop them from destroying this particular place where an activist made this video-appeal to the world, to you:

Do you want to read or distribute a message in another language?
Just go to the free translation sites:
http://www.babelfish.org/web-translation-vendor.htm
But don’t use these services for confidential texts – they are read and stored!
If you forward, please, still keep the reference to the source and
note in your distribution that the text is only an automated
translation, while the original can be obtained from ECOTERRA.
Thank you!
———————-

Filed under: US, World
Share Tweet Pin G Plus Email
previous article: I Was A Street-Corner Poet
next article: Natural Learning