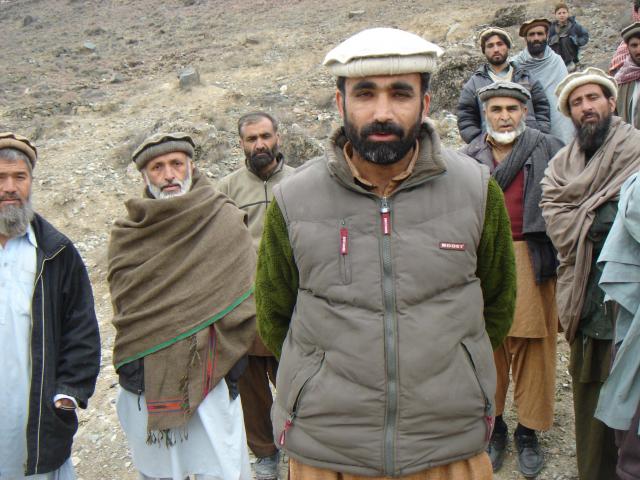 Terrorism victims of Ursoon appeal for compensation
CHITRAL:  Ursoon is situated in South West of lower Chitral on Pak Afghan border area. It is adjacent to Nooristan area of Afghanistan which is center of Taliban and extremists. A large number of terrorists attacked on security forces posts at Arandu, Ursoon and other areas on 27th August 2011 where a large number of security forces were martyred. Taliban attacked on Ursoon once again by killing an other security forces and kidnapping two cops. As well as they gutted government middle school Ursoon on 28th September 2011 as a result students of that remote area were totally deprived from education. Due to Sevier thread to local people from terrorists  the authorities directed local people to shift some safe place by vacating their houses. And some 55 families were shifted to safe places of Drosh area at Evening time. Muhammad Hakeem a local victim told this scribe that we were busy in our dinner at Evening and when we were informed to migrate from here  we left our meal there un-touching.   Haji Barakat an other elite of the area said that we left our animal, crops, fruits trees, properties and went to other places to save our lives. Hence our houses were badly damaged due to heavy snowfall at the area during winter season and now they are not able for living. He said that the government compensating other IDP (Internally displaces people) but we were totally deprived.
Syed Farid Jan Advocate a local leader of Awami National Party (ANP) disclosed that we time and again requested to district administration as well as provincial government for compensating and financial support of these affected people but their support is still awaited and nothing were given to these people. He said that this is totally injustices and cruelty  with them because these people also affected from  terrorism and they vacated their houses on the direction of the Authorities but they were not compensated. At present some 41 families are still living outside of Ursoon in rented houses. They are very poor people and can not bear rent so that is why 5 families are living in a single house causing great thread to their health due to no hygienic facilities and arrangement. A small baby Amina said that although we were reading in boys school because of no separate school for girls in Ursoon but that was also burnt by terrorists and now we can not reading and not get education. Women folk are badly suffering due to no health facilities and communication network they brining drinking waters in pitches on their heads from nearby river which is totally contaminated water. Residents of the area hailed Pakistan Army because after deploying of Pak Army in the area now they are safe and feeling no thread to their lives but their houses have been damaged after rain and snowfall and need maintenance and renovation. Residents of Ursoon appeal to federal as well as provincial government to compensate them and to support them financially for rehabilitation. A large number of youth are jobless after migrating from their native town and living below poverty line.
G.H. Farooqi Bank Islami Main branch Chitral Pakistan phone No 03337069572, 03469002167, 03159698446, 03025989602, 0943-320737, 0943-316052, 0943-414418
Email: gulhamad@gmail.com
Filed under: Lifestyle, Media & Tech
Share Tweet Pin G Plus Email
previous article: The dog that is expected to respond accordingly
next article: BJP comes out with evidence of discrimination with SCs