INU- On Wednesday, Robert Joseph, the former United States Special Envoy for Nuclear Nonproliferation participated in the latest in a series of online question-and-answer sessions hosted by the website IranFreedom.org. 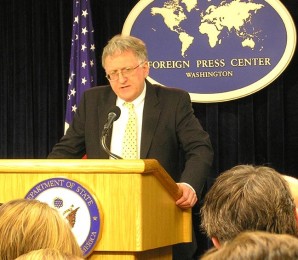 The former Under-Secretary of State for Arms Control & International Security and arms control expert spoke for several minutes about his objections to the emerging nuclear agreement between Iran and the P5+1 group of nations before spending the remainder of the hour-long webcast responding to questions from international journalists and other interested parties.

Joseph criticized the Obama administration for violating its assurances that a bad deal would be worse than no deal. In describing the April 2 framework agreement as the framework for a very bad deal, Joseph echoed the sentiments of other opponents of the Obama administration’s Iran strategy, such as Israeli Prime Minister Benjamin Netanyahu, the leaders of Saudi Arabia and other Gulf States. The Iranian opposition coalition the National Council of Resistance of Iran and its knew component, the People’s Mojahedein Organization of Iran (PMOI/Mek), have also expressed their reservations on the agreement.

These opponents have variously expressed displeasure with the US fact sheet describing some details of the April 2 agreement, which was expected to set the stage for a June 30 final deal. Points of contention include the fact that Iran will be permitted to retain a larger portion of its nuclear enrichment infrastructure including its fortified facility at the Fordow site, as well as the fact that the emerging agreement does not specifically provide for inspector access beyond Iran’s declared nuclear sites.

“It’s not going to get any better than the fact sheet,” Joseph said of any final agreement that may be signed. “It can only get worse. And it probably will get worse.”

Throughout Wednesday’s hour-long discussion, Joseph repeatedly emphasized that his assessment of the ongoing negotiations leads him to the conclusion that there will not be mechanisms in place for effective verification of Iran’s compliance with its obligations under the agreement.

“My sense is that they will cheat and we won’t detect it,” Joseph declared, adding that the Obama administration’s approach to the nuclear agreement seems to rely upon putting its trust in the Iranian regime to willfully comply. But Joseph insisted that “trust is not part of the equation,” as he outlined the Iranian regime’s past cheating in the nuclear sphere, as well as its more general untrustworthy regional activities.

In addition to criticizing the Obama administration for naivety, Joseph implicitly rejected the president’s notion that “hardliners” in American political circles are working to undermine any nuclear agreement whatsoever, and even to push for war with Iran.

“If we can negotiate an end [to the Iranian nuclear program] – a real end – with a good agreement, I think that would be a good thing,” Joseph declared. But his commentary left no doubt that an agreement along the lines currently being negotiated would fall far short of his notion of a “good agreement.”

Joseph noted that if he were in charge of the negotiations he would insist upon no zero enrichment, the complete closure of the Arak site, which could provide Iran with a plutonium pathway to a nuclear weapon, and highly intrusive inspections, including inspections of national security sites.

Anticipating challenges that such a deal is unrealistic, Joseph pointed to historical examples including President Ronald Reagan’s conflict with the Soviet Union in which he did what many said could not be done by forcing it to remove 100 percent of its intermediate-range missiles from both Europe and Asia.

According to Joseph, similar triumphs are achievable in the Iran nuclear issue as well, if the West is willing to use both economic sanctions and a credible nuclear threat to compel Iran to soften its intransigent positions. As it stands, Joseph said, the Obama administration’s approach has led Tehran to continually raise its demands, so that the conclusion of the P5+1 deal is no solely dependent on whether Iran can “take yes for an answer,” at a time when “yes” is the answer to every demand they make.

Filed under: News, Politics
Share Tweet Pin G Plus Email
previous article: Getting into a psyche of a kid was a fasicinating experience – Deshik Vansadia
next article: Taylor, Ricci & Associates: A Company of its Own