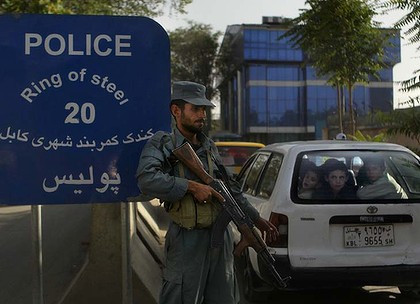 Afghan Policeman mans a checkpoint on the ring of steel near Kabul.

On April 29, 2015 I was curtesy copied on an email from Alex Bronstein-Moffly regarding allegations of corruption within the Afghan police .

Alex is the Director of Public Affairs , Special Inspector General for Afghanistan Reconstruction.

This email was very disturbing because it confirmed what we had otherwise long suspected. It confirmed that the US has no idea really how many Afghan soldiers and police are on the payroll currently. This lack of accountability has led to very serious and wide spread allegations of fraud, kickbacks and payoffs, especially among high ranking officials the Afghan police department.

All this comes on the heels of a United Nations investigation recently which also confirmed problems in terms of accountability. See article:  UN investigation finds corruption in Afghan police oversight division http://www.reuters.com/article/2015/04/19/us-afghanistan-corruption-idUSKBN0NA06C20150419

“Today, SIGAR released an audit of the Afghan National Army (ANA) personnel and payroll data. Additionally, Inspector General John Sopko, will testify today, before the Subcommittee on National Security, Committee on Oversight and Government Reform U.S. House of Representatives.  The hearing will take place at 2:00 pm eastern, and will examine U.S. assistance to pay the salaries of the Afghan National Police (ANP) and ANA.

–A decreasing number of U.S. military and civilian personnel will be left to manage and oversee $110 billion Afghanistan reconstruction effort.

–U.S. Embassy in Kabul informed SIGAR that it must reduce its staff by 40 percent.  SIGAR was told that this cut is non-negotiable. This arbitrary number was developed without SIGAR’s input, and embassy officials did not provide any explanation for how they determined these cuts.

–SIGAR’s recent audits highlight concerns that neither the U.S. nor its Afghan allies truly know how many Afghan soldiers and police are available for duty, or, by extension, the true nature of their operational capabilities.

–Once billions in U.S. funds for both the ANA and ANP reach the Afghan Ministry of Finance (MOF), DOD loses almost all visibility over them.  Additionally, SIGAR also loses criminal jurisdiction over those U.S. taxpayer funds once they are disbursed to MOF.

–Due to fundamental problems within the Afghan government’s procurement system, the DOD is moving funding for 15 contracts, valued at $922 million, off-budget for DOD to administer and manage directly.

–As a result of SIGAR’s recent investigation into bid rigging on the Afghan Ministry of Defense’s (MOD) nearly $1 billion U.S.-funded contract to deliver fuel to the ANA, President Ghani has fired numerous officials, opened his own investigation, and introduced much needed procurement reforms.

–DOD and the new Afghan government appear to be taking serious action to address weaknesses in personnel and payroll data processes, and improve the Afghan government’s ability to manage and account for U.S. on-budget assistance.

—Despite 13 years and over $2.3 billion in salary assistance to the ANA, there is still no assurance that personnel and payroll data are accurate.

–MOD does not have an electronic payroll data system, and calculates ANA salaries by hand, leaving limited assurances that personnel receive accurate salaries.

–DOD has no direct oversight of ANA personnel data and took few actions to verify the accuracy of personnel figures.  Further, DOD has minimal oversight of U.S. funding for ANA salaries, making it difficult to ensure the funds are being used to pay authorized ANA personnel their correct salaries.

–As U.S. and coalition forces continue to draw down, the U.S. government will have increasingly limited visibility over ANA data collection processes.