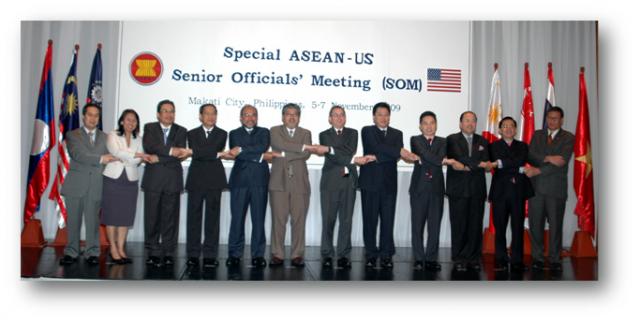 When Hillary Clinton arrives in Manila, for a two day visit as  preliminaries to rebuild US – ASEAN cooperation, the weeks of meeting moving US towards improving trade with ASEANS 500 million consumers will be ‘back on track’, a  U.S. State Department official says. "ASEAN is a key market for US goods and services and both ways the trade and ties are of great importance to the US and ASEAN."

OBAMA SET PHILIPPINES AS US-ASEAN COORDINATOR IN PAST WHITEHOUSE MEETING:

ASEAN is seen by US trade officials as an important block for pacific trade the 2nd largest consumer market for US agriculture, technology, and, Defense trade across the Pacific. ASEAN has worked on a FTA, free trade agreements, that can expand the regions trading volume.
Both US and ASEAN officials have proposed a US-ASEAN Free Trade agreement, but it is viewed as complex. Key issues need to be resolved. But improvements have been made and as individual trading partners with the U.S.A.- ASEAN countries trade volumes are bilaterally important.

Human rights and development issues in Myanmar, as well as regional security issues need to be worked out. Thailand, the Philippines, and Indonesia have Islamic extremist insurgent groups with direct ties to or are inspired by groups in the middle east.  Add to that a high level of protectionism in the Agriculture sector. A key issue that would affect agricultural trade with some of the ASEAN nations whose government subsidies albeit needed for development is a source of concern.
Also in several of the group economies, there is a general aversion by local business leaders to industries that compete with the local Oligarchs and Taipans who in some cases control monopolies. While much has been done to ensure level playing fields in a number of the regional centers the complex system has hindered growth.

Thus a full FTA, is unlikely per US officials unless a more level playing field is seen and investors can be assured of security and less problems over corruption. Which while still a concern has been less of an issue with increased efforts across ASEAN versus the problem.
‘The Obama administration has a distinct advantage on ASEAN’, a senior official on sidelines of this week’s meeting told us, "because at least for change no one will need to tell members of the cabinet and the President what ASEAN is… and could mean to reinvigorating the global economy." Chuckling the official from Indonesia pointed to picture he had of his Jakarta schools upper classman on a briefing kit book cover – an American kid they knew as ‘Barry’.

ASEAN, a regional cooperation grouping of Singapore, Indonesia, Malaysia, Thailand, the Philippines, Laos, Cambodia, Myanmar (Burma) and, Vietnam is one of the worlds least affected regions in the current global financial crisis. Its own domestic consumption and relative economic stability has been a bright spot in an otherwise global recession.

The Philippines, as the current Country Coordinator for ASEAN-U.S. relations, this week was the host for a Special Senior Officials’ Meeting from the  5th  to the 7th of November in Makati City the meeting is part of steps to prepare for the ASEAN-U.S. Leaders’ Meeting in Singapore on 15 November 2009.

Macapagal-Arroyo will discuss the smooth turnover of power and the implementation of a clean, honest and orderly election when US Secretary of State Hillary Rodham Clinton visits the Philippines next week on her way to Singapore for the Asia Pacific Economic Cooperation Leaders’ Summit,” Philippine Press Secretary Serge Remonde said on Government radio.

Hillary, remains largely popular among Filipino Americans, Manila’s registered democrats out of the 200,000 Americans permanently living here had been more supportive of the former New York Senator and First Lady.  “These are issues that the President and Secretary Clinton see eye to eye,” Remonde said in an interview today with ‘Radyo ng Bayan’ the Philippine National Government radio network.

“She (the President) is pushing for the automation of election and will provide the Commission on Election with whatever help it needs for a successful election in 2010. The President also wants a peaceful and orderly transition of power,” he said further that the visit of Secretary Clinton “further shows that the Philippines and the United States have very good relations.”

On a personal note, Remonde said the Palace welcomes the visit of Secretary Clinton, whose last visit to the country was as the US First Lady. The President and former US President Bill Clinton have known each other since they were classmates at the Georgetown University in the United States.

Senior officials of the Association of Southeast Asian Nations (ASEAN) and the United States concluded a two-day special meeting in Manila to set the stage for the 1st ASEAN-U.S. Leaders’ meeting.

The Philippines currently serves as the Country Coordinator for ASEAN-U.S. Dialogue Relations.

“The ASEAN Senior Officials had a very productive meeting with our counterparts from the United States and we look forward to a successful 1st ASEAN-U.S. Leaders’ meeting in Singapore next week,” Undersecretary Manalo remarked.

Senior officials of the 10-member ASEAN and the United States discussed areas for broader and deeper cooperation, for Leaders’ consideration at the inaugural meeting to be held in Singapore on 15 November 2009.

The Heads of State/Government of the 10 ASEAN member states namely, Brunei, Cambodia, Indonesia, Laos, Malaysia, Myanmar, the Philippines, Singapore, Thailand and Vietnam will meet with U.S. President Barack Obama to discuss progress on ASEAN-U.S. cooperation, as well as explore new areas of collaboration.

President Gloria Macapagal Arroyo will attend the meeting in Singapore, which will be the first between ASEAN and U.S. Leaders in the 32-year history of ASEAN-U.S. relations.

The discussion will include a broad-range of areas such as trade and investment, development cooperation, education, energy, health, climate change, food security, disaster management, interfaith dialogue, and security issues.

President Obama is expected to reiterate the U.S. policy of reinvogorating engagement with ASEAN which it regards as a key partner in the promotion of peace, stability and prosperity in the Asia-Pacific region.