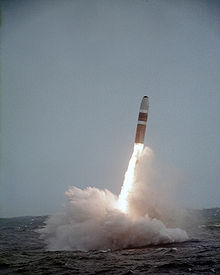 The launch of a Trident sea based nuclear missile.

On August 29, 2014 President of Russia Vladimir Putin address questions at  the Seliger 2014 10th National Youth Forum. The Forum’s current participants, gathering under the name of the Knowledge Generation, include postgraduates and young teachers from around Russia in the fields of history, political science, sociology, philosophy and economics.

There Putin talked briefly about the strategic importance of the Arctic.

“On the matter of the Arctic, this is a crucially important region for Russia. Our country is the world’s biggest in terms of size. Even after the collapse of the Soviet Union, which was truly vast, Russia remains the biggest country in terms of territory, but more than 70 percent of our territory is located in the Far North. This is something we need to remember.

The Arctic is a particular region not just for its harsh climate but also in the opportunities it holds. Lomonosov said in his time that Russia would grow through Siberia and this is exactly what is happening, but the Arctic is certainly set to develop too. This is not just because the region holds enormous reserves of mineral wealth, reserves big enough for the entire planet – I’m talking about gas, oil and metals – but it is also an exceptionally convenient region for developing transport infrastructure.

We have begun reviving the Northern Sea Route. You have no doubt read about this many times and probably discuss it with your students. This route will be a powerful competitor for the existing transport routes and could cut freight transport costs for business.

The Arctic plays a very important part for us in terms of guaranteeing our security too. It is regrettably the case that the United States’ attack submarines are concentrated in that area, not far from the Norwegian coast, and the missiles they carry would reach Moscow within 15-16 minutes, just to remind you.

But we have our navy there and quite a big part of our submarine fleet. It is quite easy today to track submarines, but if they go under the Arctic ice this makes them invisible and this is a big problem for the people trying to track them. In short, we have this concentration of interests in the Arctic.

Of course we must give more attention to developing the Arctic and strengthening our position there. You might have noticed that we are already doing this. This concerns our plans to build a fleet of nuclear icebreakers too, and our plans to return to some territories, including islands, return in the economic sense and maintain a military presence too.”