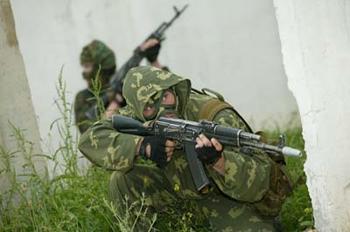 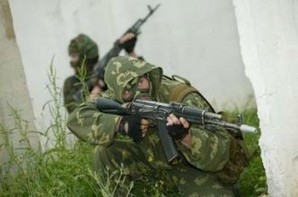 “US bases are scattered around the globe – and you’re telling me Russia is behaving aggressively? Do you have any common sense at all? What are US armed forces doing in Europe, also with tactical nuclear weapons? What are they doing there?”, says Putin to stunned reporter from BBC. Pictured here: Elite Russian special forces on military training exercise 2014.

On December 18, 2014 President Vladimir Putin held a press conference where he discuss various issues. The President’s news conference was broadcast live by Channel One, Rossiya-1 and Rossiya-24 TV channels, and by the Radio Rossii, Mayak and Vesti FM radio stations.

During the conference Putin in response to a reporter’s question made comment on American aggression toward Russia.

The exchange was as follows:

JOHN SIMPSON, BBC: Western countries almost universally now believe that there’s a new Cold War and that you, frankly, have decided to create that. We see, almost daily, Russian aircraft taking sometimes quite dangerous manoeuvres towards western airspace. That must be done on your orders; you’re the Commander-in-Chief. It must have been your orders that sent Russian troops into the territory of a sovereign country – Crimea first, and then whatever it is that’s going on in Eastern Ukraine. Now you’ve got a big problem with the currency of Russia, and you’re going to need help and support and understanding from outside countries, particularly from the West. So can I say to you, can I ask you now, would you care to take this opportunity to say to people from the West that you have no desire to carry on with the new Cold War, and that you will do whatever you can to sort out the problems in Ukraine? Thank you!

VLADIMIR PUTIN: Thank you very much for your question. About our exercises, manoeuvres and the development of our armed forces. You said that Russia, to a certain extent, contributed to the tension that we are now seeing in the world. Russia did contribute but only insofar as it is more and more firmly protecting its national interests. We are not attacking in the political sense of the word. We are not attacking anyone. We are only protecting our interests. Our Western partners – and especially our US partners – are displeased with us for doing exactly that, not because we are allowing security-related activity that provokes tension.

So we didn’t make flights for many years and only a couple of years ago we resumed them. So are we really the ones doing the provoking?

So, in fact, we only have two bases outside Russia, and both are in areas where terrorist activity is high. One is in Kyrgyzstan, and was deployed there upon request of the Kyrgyz authorities, President Akayev, after it was raided by Afghan militants. The other is in Tajikistan, which also borders on Afghanistan. I would guess you are interested in peace and stability there too. Our presence is justified and clearly understandable.

Now, US bases are scattered around the globe – and you’re telling me Russia is behaving aggressively? Do you have any common sense at all? What are US armed forces doing in Europe, also with tactical nuclear weapons? What are they doing there?

Listen, Russia has increased its military spending for 2015, if I am not mistaken, it is around 50 billion in dollar equivalent. The Pentagon’s budget is ten times that amount, $575 billion, I think, recently approved by the Congress. And you’re telling me we are pursuing an aggressive policy? Is there any common sense in this?

Are we moving our forces to the borders of the United States or other countries? Who is moving NATO bases and other military infrastructure towards us? We aren’t. Is anyone listening to us? Is anyone engaging in some dialogue with us about it? No. No dialogue at all. All we hear is “that’s none of your business. Every country has the right to choose its way to ensure its own security.” All right, but we have the right to do so too. Why can’t we?

Finally, the ABM system – something I mentioned in my Address to the Federal Assembly. Who was it that withdrew unilaterally from the ABM Treaty, one of the cornerstones of the global security system? Was it Russia? No, it wasn’t. The United States did this, unilaterally. They are creating threats for us, they are deploying their strategic missile defense components not just in Alaska, but in Europe as well – in Romania and Poland, very close to us. And you’re telling me we are pursuing an aggressive policy?”