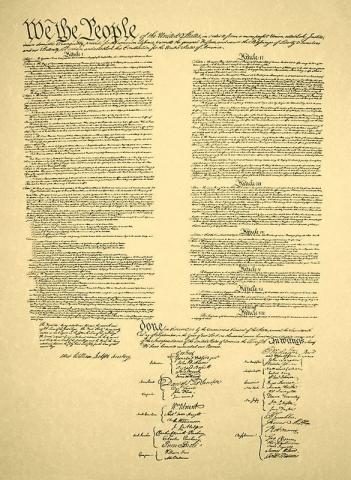 September 17th is Constitution Day in the United States.   Do my fellow Americans know where their Constitution is?  Their constitution remains in exile, shredded to tatters by Presidents, Congress, the Federal Courts and the Supreme Court.

The Constitution is a document of enumerated powers and unenumerated rights, grounded in the doctrine of natural law.  The bipartisan cabal of Republicans and Democrats, whether they call themselves conservative or liberal has undermined the Constitution at least since the presidency of Theodore Roosevelt, the progressive imperialist.  As William Graham Sumner noted in The Conquest of The United States By Spain, an imperial state abroad would lead to an imperial state at home.

The national security state, the aggressive warfare state and the welfare state violate the Constitution.

Just as Bush’s No Child Left Behind and PATRIOT Act measures violated the Constitution so do the Obama stimulus and health measures.   Not suprisingly, Obama seeks to continue key provisions of the PATRIOT Act.  Where is the constitutional justification for Obamacare?  Like Ron Paul, the very first question we should ask of any proposal must be "Is it constitutional?".  (Full disclosure: I am a longtime supporter of Ron Paul for more than 20 years and was a Ron Paul delegate candidate in the 2008 New York primary).

There is a provision built into the constitutional framework for making changes necessary or merely popular. It is the amendment process.

Obama’s Chief Of Staff Has Plan For America  https://groundreport.com/articles.php?id=2902509