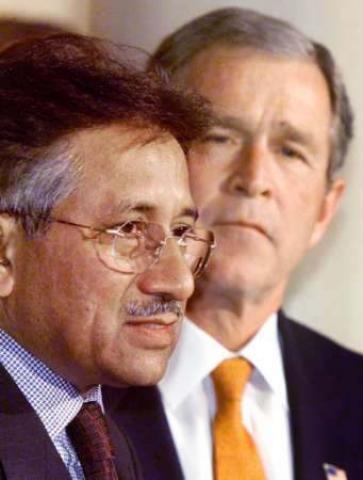 Amidst the deepening political crisis in Pakistan, United States Continue to pour money into Pakistani coffers to send a clear message of its support for President Musharraf and his plans to cling on to power against all odds. The recent package of US $ 588,000 has come for helping Pakistan meet its ever growing energy demand-supply gap which at present stands at over 2000 MWs.

The aid package consist of two grants to find alternative means of energy while another US $ 810,000 package is coming Pakistan’s way this September to conduct a feasibility study in Lakhra Coal fields to set up a 150 MW private power plant. All the grants are coming from the US Trade and Development Agency.

A ceremony to sign the initial two grants was held in Islamabad on Monday, where Lt. General Saeed uz Zafar of the National Electric Power Regulatory Authority and Air Marshal Shahid Hamid of the Alternative Energy Development Board jointly inked the agreements in the presence of American Ambassador to Pakistan Anne Patterson. Addressing the signing ceremony, American Ambassador Patterson said, “These grants are concrete expressions of our commitment to Pakistan’s economic development under the U.S.-Pakistan Energy Discussions framework. During President Bush’s visit to Pakistan in March 2006, he and President Musharraf launched the framework. This framework identified renewable energy development as a priority area.”   President Bush had a stop over in Pakistan after signing an MOU with the Indian government in New Delhi regarding the Indo-US Nuclear cooperation in March 2006, and had to pacify Pakistan’s concerns by announcing to help Pakistan with its burgeoning energy needs. It helped Musharraf to calm down the opposition parties in Pakistan at that time but more recently the restrictions of development aids by the US has once again strained the relations between Pakistan and US. Many government MPs and even minister considered this a slap in the face despite the fact that Pakistan is considered the top ally of US in the war on terrorism. United States has also earmarked over one billion for the development of tribal areas in Pakistan, an announcement which Negroponte made during his visit to Pakistan this June and now these grants for renewable energy are seen as a pacifying act by Bush administration to help its estranged and entangled ally Musharraf. Recent reports have confirmed that Pakistan is the third largest recipient of US aid after Israel and Egypt but given the bills of logistic support Pakistan has been receiving from US since the invasion of Afghanistan, many believe that Pakistan tops the list. Bush administration has been facing growing criticism from the democrats and Republicans alike for supporting Musharrf without much success against Talibans and arrest of wanted figures like Osama Bin Laden and Mullah Omer. But knowing the pitfalls in the faltering war on terrorism, Bush administration has realized that without changing the economic and social conditions of Pakistan, problem of terrorism cannot be tackled, therefore it has agreed to conditionalise one billion dollar a year aid packages with progress in war on terrorism. Bush administration believes that conditionalities would help keep Pakistan on track besides giving a handle to maneuver Pakistani leadership. In this context the recent energy grants are considered very important as well as timely for the embatteled friend of Washington, who is running his horses in all directions to ensure some peace of mind and complete control over power, which he lost because of his ill-advised action against chief justice of apex court this March. The first grant of $325,000 was given to the Alternative Energy Development Board (AEDB) and would help Pakistan in developing new electric power supplies through a detailed evaluation of a 5 – 10 megawatt waste-to-energy power plant in the Karachi area. This project is particularly important given the serious energy problems in Karachi and the city’s role in the national economy, she added. The project will assist Pakistan in meeting the growing demand for power, decrease Pakistan’s energy import bill, and enhance the nation’s energy security. The second grant is for $263,000 to Pakistan’s National Electric Power Regulatory Authority (NEPRA) and would assist in reviewing renewable energy projects and recommending tariff-setting procedures and changes to the legal framework of the renewable energy sector, she told the audience. U.S. Trade and Development Agency recently approved $810,000 for a feasibility study for a private sector integrated coal mining and power plant project in the Lakhra coalfields. This proposed 150 megawatt project is a major private sector initiative that would help alleviate Pakistan’s present and growing power generation shortfall, and would be a major advance in developing of the country’s enormous but largely untapped coal resources, she said. She hoped that the signing ceremony for this grant would be held this September in Washington, D.C. In addition, the Trade and Development Agency has been active in Pakistan in a range of sectors, including energy, telecommunications, and emergency response.