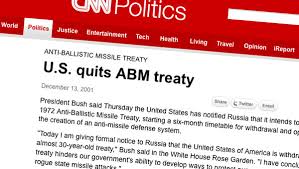 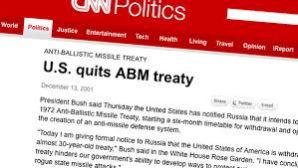 US quits ABM, then surrounds Russia with missiles? Is that a threat to Russian national security interests?

On December 4, 2014 Vladimir Putin gave his annual Presidential Address to the Federal Assembly, which was largely ignored by the western media but very important in terms of its long range implications:

“I would like to speak about the most serious and sensitive issue: international security.

Since 2002, after the US unilaterally pulled out of the ABM Treaty, which was absolutely a cornerstone of international security, a strategic balance of forces and stability, the US has been working relentlessly to create a global missile defense system, including in Europe.

This poses a threat not only to Russia, but to the world as a whole – precisely due to the possible disruption of this strategic balance of forces.

I believe that this is bad for the US as well, because it creates the dangerous illusion of invulnerability. It strengthens the striving for unilateral, often, as we can see, ill-considered decisions and additional risks.”

See related video: Russia threatens to deploy missiles in row with US  https://www.youtube.com/watch?v=95-HOfHLG0s

Filed under: Military, News
Share Tweet Pin G Plus Email
previous article: “Under no conditions will we curtail our relations with Europe or America”, Putin says
next article: Syrian Army pushes it way through al-Tharda killing large numbers of ISIL terrorists