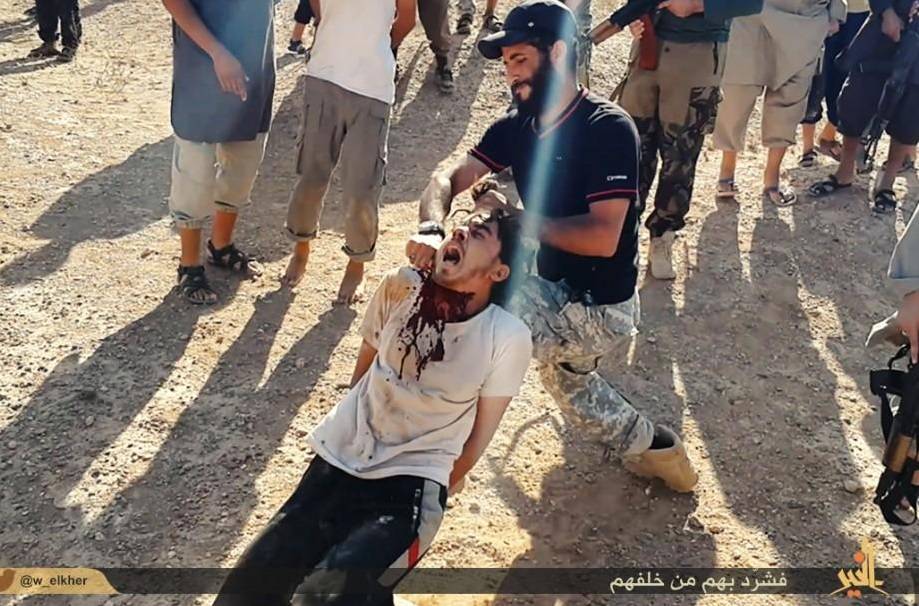 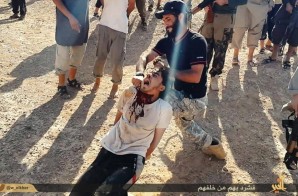 ISIS fighter beheads Iraqi youth (note his hands are bound behind his back and he is very much alive). Sick bastards! More appalling still is the fact that the US helped train and equip ISIS fighters to begin with to help undermine peace in Syria and prolong a bloody civil war that has laid claim to hundreds of thousands of lives and forced upwards to 2.5 million people to flee that country – creating one of the largest humanitarian crisis’s in the world! I don’t know at times who is more insane President Obama and his warped foreign policy decisions or ISIS psychopaths and serial killers cutting people’s heads off as trophy’s and crucifying people to posts?

“At the request of the Government of Iraq, the United States military today airdropped humanitarian aid to the town of Amirli, home to thousands of Shia Turkomen who have been cut off from receiving food, water, and medical supplies for two months by ISIL. The United States Air Force delivered this aid alongside aircraft from Australia, France and the United Kingdom who also dropped much needed supplies.

In conjunction with this airdrop, U.S. aircraft conducted coordinated airstrikes against nearby ISIL terrorists in order to support this humanitarian assistance operation.

These military operations were conducted under authorization from the Commander-in-Chief to facilitate the delivery of humanitarian assistance and to prevent an ISIL attack on the civilians of Amirli. The operations will be limited in their scope and duration as necessary to address this emerging humanitarian crisis and protect the civilians trapped in Amirli.

The U.S. military will continue to assess the effectiveness of these operations and work with the Department of State, the U.S. Agency for International Development, as well as international partners including the Government of Iraq, the United Nations, and non-government organizations to provide humanitarian assistance in Iraq as needed.”

Note: It should be understood that the United States helped “spawn” ISIS (Islamic State of Iraq and Syria) by training and funding ISIS fighters in secret camps in Jordan.

Source: See video: US was responsible for training ISIS in Jordan http://www.youtube.com/watch?v=yhuo7-U7mOo

The utter at total hypocrisy of President Obama’s and Hillary Clinton’s foreign policy decisions is enough to make me sick and want to vomit!

I have even began to question President Obama’s  sanity in taking actions that has prolonged the bloody conflict in Syria? My question is why did we do that?

The war in Syria has uprooted some 6.5 million people from their homes, forced 2.7 million to flee the country, laid waste to cities and towns alike, and unleashed sectarian hatreds that have rippled across the region.

The US is playing a major part in the chaos along with its allies and partners within the Saudi government who have actually suggested funding the rebels is a good idea in the first place? Hillary Clinton agrees by the way!

Already some in Congress have raised questions as to whether the Obama administration has ever armed ISIS terrorists with lethal weapons? They should perhaps look no further than themselves – for voting for it in the first place.

If your curious at all about which Congressman and senator voted to help fund Syrian rebels – you can’t that information is classified top secret?