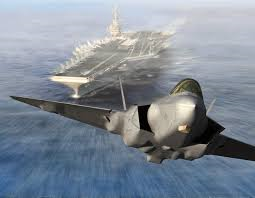 F-35 Joint Strike Fighter takes off from an air craft carrier somewhere in the Atlantic ocean.

On January 8, 2015 the Pentagon  announced the “consolidation of some U.S. infrastructure in Europe”, including the return of 15 sites to their host nations. These actions, taken as part of the European Infrastructure Consolidation (EIC) process, will save the U.S. government approximately $500 million annually.

The DoD also announced the first F-35 basing in Europe at RAF Lakenheath, UK, which will bring new opportunities for collaboration between the U.S. and UK air forces.

These actions will result in a slight decrease in our force levels, but will also ensure they are most effectively positioned to enable the U.S. and our NATO allies to respond quickly to crises worldwide. Additionally, these actions will result in the greater efficiency and effectiveness of our presence in Europe by reducing the U.S. footprint while ensuring that the infrastructure in place will continue – now and into the future – to sustain U.S. interests and support our partners in the region.

“As part of an overall restructuring of our basing in Europe, we have been working with our allies to reposition thousands of our military and civilian personnel within the region,” said Secretary of Defense Chuck Hagel. “I know that this will result in a reduction in size of our local host nation workforces at some locations; I value the tremendous support they provided us for decades and continue to provide today. In the end, this transformation of our infrastructure will help maximize our military capabilities in Europe and help strengthen our important European partnerships, so that we can best support our NATO allies and partners in the region.”

The administration requested, and received, congressional approval for the European Reassurance Initiative (ERI), a total of $985 million for DoD, which will: enhance a U.S. rotational presence in Europe for training, exercises, and other NATO activities; implement infrastructure improvement projects to support the increase military presence by the U.S. and other allies in eastern Europe; pre-position U.S. assets in Europe; and enable the United States to build the capacity of our newer allies as well as Ukraine, Georgia and Moldova.