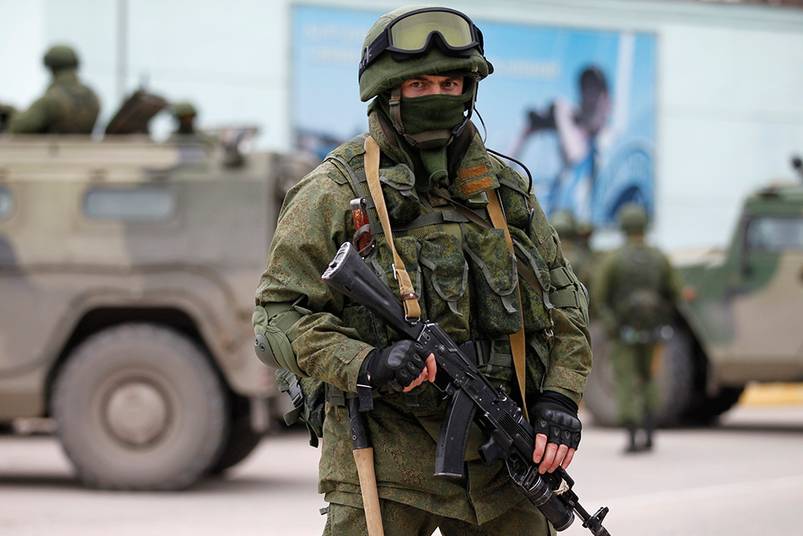 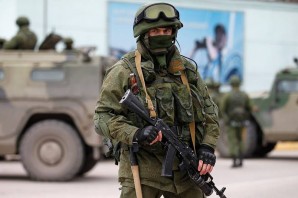 POLICY STATEMENT ON UKRAINE AS WRITTEN IN HR 5859: “It is the policy of the United States to further assist the Government of Ukraine in restoring its sovereignty and territorial integrity to deter the Government of the Russian Federation from further destabilizing and invading Ukraine and other independent countries in Central and Eastern Europe, the Caucasus, and Central Asia. That policy shall be carried into effect, among other things, through a comprehensive effort, in coordination with allies and partners of the United States where appropriate, that includes economic sanctions, diplomacy, assistance for the people of Ukraine, and the provision of military capabilities to the Government of Ukraine that will enhance the ability of that Government to defend itself and to restore its sovereignty and territorial integrity in the face of
unlawful actions by the Government of the Russian Federation.” END QUOTE. Pictured here: Russian infantryman deployed in Krim, Ukraine.

H.R. 5859 would impose sanctions with respect to the Russian Federation, to provide additional assistance to Ukraine (in the form of military and non military aid), and for other purposes:

Senator Walsh (Mr. WALSH): “Mr. President, I ask unanimous consent that the Senate proceed to the immediate consideration of H.R. 5859, which is at the desk.

The PRESIDING OFFICER. The clerk will report the bill by title.

The legislative clerk read as follows:

A bill (H.R. 5859) to impose sanctions with respect to the Russian Federation, to provide additional assistance to Ukraine, and for other purposes.

There being no objection, the Senate proceeded to consider the bill.

Mr. WALSH. Mr. President, I ask unanimous consent that the bill be considered read a third time and the Senate proceed to vote on passage of the bill.

The bill was ordered to a third reading, and was read the third time

The PRESIDING OFFICER. Is there further debate?

If not, the bill having been read the third time, the question is, Shall the bill pass?

Mr. WALSH. Mr. President, I ask unanimous consent that the motion to reconsider be considered made and laid upon the table with no intervening action or debate.

The PRESIDING OFFICER. Without objection, it is so ordered.”

(a) In General.–The President is authorized to provide defense articles, defense services, and training to the Government of Ukraine for the purpose of countering offensive weapons and reestablishing the  sovereignty and territorial integrity of Ukraine, including anti-tank  and anti-armor weapons, crew weapons and ammunition, counter-artillery  radars to identify and target artillery batteries, fire control, range  finder, and optical and guidance and control equipment, tactical troop- operated surveillance drones, and secure command and communications
equipment, pursuant to the provisions of the Arms Export Control Act  (22 U.S.C. 2751 et seq.), the Foreign Assistance Act of 1961 (22 U.S.C.  2151 et seq.), and other relevant provisions of law.
(b) Report Required.–Not later than 60 days after the date of the enactment of this Act, the President shall submit a report detailing  the anticipated defense articles, defense services, and training to be  provided pursuant to this section and a timeline for the provision of  such defense articles, defense services, and training, to– (1) the Committee on Foreign Relations, the Committee on Appropriations, and the Committee on Armed Services of the Senate; and(2) the Committee on Foreign Affairs, the Committee on Appropriations, and the Committee on Armed Services of the House of Representatives. (c) Authorization of Appropriations.– (1) In general.–There are authorized to be appropriated to the Secretary of State $100,000,000 for fiscal year 2015, $125,000,000 for fiscal year 2016, and $125,000,000 for fiscal year 2017 to carry out activities under this section. (2) Availability of amounts.–Amounts authorized to be appropriated pursuant to paragraph (1) shall remain available for obligation and expenditure through the end of fiscal year 2018. (d) Authority for the Use of Funds.–The funds made available
pursuant to subsection (c) for provision of defense articles, defense services, and training may be used to procure such articles, services, and training from the United States Government or other appropriate sources.(e) Protection of Civilians.–It is the sense of Congress that the Government of Ukraine should take all appropriate steps to protect civilians.
See video: Ukraine fires ballistic missiles at rebels an civilians https://www.youtube.com/watch?v=y9-8KvtfjZA&list=PLcUCerwuhHgyBz67juJOl6s4cW0AviKnJ&index=11