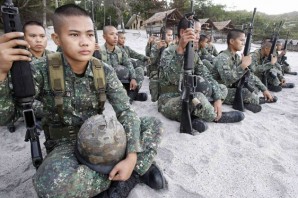 Young Philippine Marines prepare for war games sponsored by US.

Over 5,000 US and Filipino soldiers have begun war games exercises on the edge of the South China Sea at a time of increased tension and territorial disputes with China.

Many in Southeast Asia question the US decision in this matter and see the war games as a “provocative move” on the part of the US – which is spread painfully thin all across the world and straining under the pressure of operation Enduring Freedom in Afghanistan- America’s longest and most expensive war in modern history. The cost of which is over $1 billion dollars US.

According to the Pentagon Secretary Hagel also welcomed the opportunity for U.S. forces to train with the Armed Forces of the Philippines in the BALIKATAN (“shoulder to shoulder”) exercises, which commences today.

Secretary Hagel noted the importance of the exercise to regional security

The war games will involve the participation of an undisclosed number of advanced US F-18 fighter jets and soldiers involved in live ammo exercises, on the main island of Luzon.

Philippine Foreign Secretary Albert del Rosario made reference to China, with whom Manila has had territorial conflicts, when he said the exercises would help counter “excessive and expansive maritime and territorial claims.”

“The aggressive patterns of behavior, aimed at changing the status quo, threaten peace and stability in the region. Balikatan 2014 with its focus on maritime security strongly supports our capabilities to address these challenges.”

China and the Philippines have exchanged threats over ownership rights to the Spratly Islands, an archipelago in the South China Sea, which is believed to contain a vast quantity of oil and natural gas reserves. The islands, which spread over more than 425,000 square kilometers (164,000 square miles) of water, are also claimed by Brunei, Malaysia, Taiwan and Vietnam.