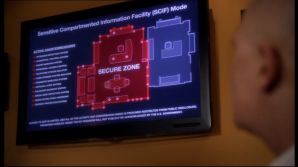 I was reading over the Intelligence Authorization Act for 2014-2015 over my morning cup of coffee this morning and read section 314 that indicates some concerns over the protection of compartmentalized information security at US diplomatic facilities in and around Russia.

The section will require each US diplomatic facility that undergoes a construction upgrade to build special information facilities for the protection and security of compartmentalized information.

Meaning information that is highly sensitive or classified in nature. These are sometimes called “Skiff” or “SCIF” rooms.

See video: SCIF Portable and Modular Buildings for Military and Government Use https://www.youtube.com/watch?v=rDjJ6uSYWWc

The section reads as follows:

(a) Sensitive Compartmented Information Facility Requirement.–Each United States diplomatic facility that, after the date of the enactment of this Act, is constructed in, or undergoes a construction upgrade in, the Russian Federation, any country that shares a land border with the Russian Federation, or any country that is a former member of the Soviet Union shall be constructed to include a Sensitive Compartmented Information Facility.

(b) National Security Waiver.–The Secretary of State may waive the requirement under subsection (a) if the Secretary determines that such waiver is in the national security interest of the United States and submits a written justification to the appropriate congressional committees not later than 180 days before exercising such waiver.

In United States military, security and intelligence parlance, a Sensitive Compartmented Information Facility (SCIF; pronounced “skiff”) is an enclosed area within a building that is used to process Sensitive Compartmented Information (SCI) types of classified information. SCI is classified information concerning or derived from intelligence sources, methods, or analytical processes, which is required to be handled within formal access control systems established by the Director of National Intelligence (DNI). Some entire buildings are SCIFs where all but the front foyer is secure. Access to SCIFs is normally limited to those with clearance.

See article: Today I Briefed Congress on the NSA https://www.schneier.com/blog/archives/2014/01/today_i_briefed.html

All of the activity and conversation inside is presumed restricted from public disclosure. A SCIF can also be located in an air, ground or maritime vehicle, or can be established on a temporary basis at a specific site.

The physical construction, access control, and alarming of the facility has been defined by various directives, including Director of Central Intelligence Directives (DCIDs) 1/21 and 6/9, and most recently (2011) by Intelligence Community Directive (ICD) 705, signed by the Director of National Intelligence. ICD 705 is a three page document that implements Intelligence Community Standard (ICS) 705.1. Computers operating within such a facility must conform to rules established by ICD 503. Computers and telecommunication equipment within must conform to TEMPEST emanations specification as directed by a Certified TEMPEST Technical Authority (CTTA).

SCI is usually only briefed, discussed, and stored in an accredited SCIF.

Filed under: News, US
Share Tweet Pin G Plus Email
previous article: US employs non US citizens to work at its diplomatic facilities in Russia who have not been properly vetted in terms of a background check
next article: University of Delaware Soccer