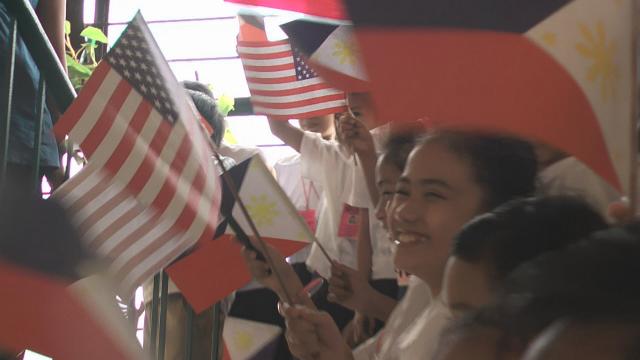 Thats enough assistance to help feed for 60 days some 450,000 people in the typhoon raveged country that was hit by back to back disasters and flooding in recent weeks.

Philippine government figures show over 180,000 famlies are still suffering from the effects of back to back Typhoons and the massive flooding they caused. Agricuture was hard hit, Government estimates are that nearly 28 billion pesos (US $580 million) in crop losses and production facilities as well as crop preparation areas were damaged or destroyed.

Monday afternoon the Secretary visited the Sagad Elementary School in the Metro Manila suburb of Pasig City, one of the hardest hit communities in the capitol region in the recent disaster. Sec. Vilsack and Philippine Agriculture Secretary Arthur Yap handed out USDA nutrition packages to school children. (see photo’s below)

US food brands are the top imports to Philippine shores

The Philippines is major US brands and product hub for American exports. The U.S.A. is the Philippines largest agricultural trading partner, the Asian country’s overall agribusiness trade with the US is up 44% from last year.

Wheat, Flour, Beef, Poultry, and other agricultural commodities – US imports pineapple, sugar, banana’s canned tuna, and tropical fruit, the larger trade share balance going to the USA roughly $3.2 billion in favor of the USA per the Philippine government figures.

Those figure do not include US franchise holders in the Philippines. Who count on US based suppliers for the Philippines numerous US brand franchises. "Metro Manila alone has more US food franchises, like the Golden Arches and Coffee outlets, than most of the US Midwestern states combined." a US AID report from 2008 notes that US food service franchises number in excess of 2800 outlets. "And that number is growing daily,"

Although incorporated and majority owned locally, the shops purchase food and non-food items in the fast food as well as food and beverage products that combined with imported us food products is nearly double USDA and Philippine government agriculture department trade figures.

There are over 20 U.S. agribusinesses travelling with the Secretary
who will develop additional lines of commerce by meeting with nearly 200 Philippine companies.  Vilsack says, "This is an excellent business opportunity on both sides of this two-way trade equation." the secretary has also said the weaker dollar has helped us agribusiness products become more competitive in Asia.

The mission’s goal is to promote trade and investment, particularly in the fisheries, bio-fuels, processed goods, beverages, meat and
poultry, dairy products, agricultural machineries and equipment
sectors.  Participating U.S. companies will have the opportunity to
form partnerships and joint ventures with Philippine companies.

AID PROGRAM: US Rice and Milk forms the bulk of Food Aid

President Gloria Arroyo, met with the US Agricultural delegation led by Vilsack earlier Monday, The USDA Secretary Tom Vilsack said the plans for $8.5 million in international assistance under USDA’s Food for Progress Program for the Philippines.

Vilsack made the announcement at a meeting in Malacanang Palace with Philippine President Gloria Arroyo and Secretary of Agriculture Arthur Yap.

"The commodity donations will provide food to an estimated 438,000 people for 60 days." A USDA statement said further that,  "The United States understands the importance of international assistance in the aftermath of disasters like the typhoons that recently hit the Philippines,"

Vilsack also told reporters, "The food aid I am announcing today will help the people in the most need of assistance, and as a longstanding friend and partner of the Philippines, the United States stands ready to continue our cooperation and assistance in the future."

The Food for Progress allocations announced today are for roughly 7,000 metric tons of U.S. rice and 680 metric tons of non-fat dry milk that is produced in the United States and donated by USDA.

The donated commodities will be processed into Ultra High Temperature milk and biscuits and distributed to flood victims.

Filed under: Business, US
Share Tweet Pin G Plus Email
previous article: IJT convention at Chitral
next article: Can vegetable juices lower your blood pressure and help you lose weight?