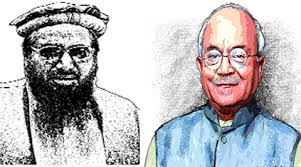 A few months back during the election campaign there was big declaration of having a tough stand against “Pakistan” and about having absolutely no tolerance for those people who perpetrate terror in India. Hafeez Saeed is the mastermind of the gruesome unforgettable globally known Mumbai terror attack that happened on 26/11/2008. It is a wound that rakes up every time we the see the man responsible moving freely in the country that has always conspired against us. To bring the situation to order, to take the right course of action and to protect our borders from further disturbance we elected the Modi led NDA government to power.  India never intends to be the aggressor, we never wish to bully our neighbors, however, we do wish to gain respect and peace through fair means. 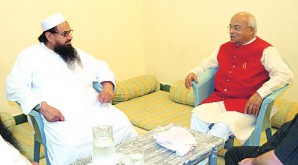 Hafeez Saeed with Vaidik in Lahore

Due to the inaction and policy paralysis of the previous UPA-2 government we have come back to the ground zero of being a struggling economy. The Congress government in 1991 led to the IT revolution which was further enhanced by the NDA-1 government that resulted in the biggest economic boom ever. However, the following UPA-1 and 2 government put a big brake to it.  This gave rise to inflation and unemployment along with other problems. So, the previous government lost the elections. The promise made by the ruling party during the election campaign was that of creating a strong nation that would have secure borders and the one  that will speak tough against those who challenge our sovereignty.

Doubts were raised when Prime Minister elect Narendra Modi invited Pakistani Prime Minister Nawaz Sharif to his swearing-in ceremony along with other leaders of the almost dead organization SAARC. There was no need shouted many voices from all corners of the country. Why Pak PM? The opposition rose to the golden opportunity and were uncontrollable in accusing the to-be government of having double standards. It was a complete chaos and Nawaz Sharif was possibly seeking a nod from the ISI for attending  the ceremony. Finally, he got it and he came to India with a dove in his hand ( not literally), it looked like that. PM Modi discussed with him the need for having a fast trial on 26/11 which the Pak PM acknowledged and left without meeting the separatists leaders of Kashmir for the first time.

Everyone was overjoyed and the praises of the new Prime Minister’s diplomatic prowess were being sung everywhere. But of course, the opposition with no leader of opposition were bitter about the event. Fast forward to the Vaidik-Saeed meeting and the strong stand of the Indian government against the terrorist has softened at least in this case.  They are numb to the point of doubt. This so-called self-proclaimed senior journalist and envoy of India, met the most dreaded 26/11 mastermind to ask him questions such as the number of wives he had etc. Any journalist, even of my stature, who is considerably new and has very little experience would also maintain a record of the interview.  Journalists are hungry for news and they want to publish them at any portal possible at the earliest. They always have their reports ready. Why would he who met the killer of 26/11 by putting his life in danger have not done this? What kind of  journalist declares himself a messenger of peace and tries to manipulate the heart of a terrorist? On top of it, what kind of journalist asks absolutely absurd questions like , “what would you do if your enemy country’s PM visited this place?” Certainly, this is not a journalistic adventure at all. A journalist reports and analyzes. But he doesn’t try to influence through his biased perspective. It is against ethics of journalism to promote somebody like Osama Bin Laden as a humanitarian person with a vulnerable heart.

On top of it, Mr.Vaidik openly praised so-called “Mujahideen-e-Awal” which means the first crusader or jihadi of Kashmir (Hafeez Saeed). This man who is an internationally declared terrorist, the one who has a  billion dollar bounty on his head was praised by an Indian national, the country against whom he conspires! Vaidik has now released so called interview in which he has asked so-called tough questions still not a single one including 26/11 . But what is the authenticity of this interview? Also, who set up this meeting still remains an unanswered question. The third thing is Vaidik has once again tried to glorify this man Hafeez Saeed by expressing him as a “calm” individual. He has tried to paint a rosy picture of the one who has blood of innocent Indians on his hands.

While I write this piece, many eminent journalists who had accompanied Ved Pratap Vaidik on his so-called unofficial peace tour to Pakistan have already painted this issue as overblown. I can understand why they did this, some are even blaming  Times Now anchor Arnab Goswami for asking irrelevant (actually tough) questions to Vaidik. Goswami may be an unconventional journalist who interrupts while the other person is answering according to many, but he did allow Vaidik to make his statement. However, the reply he got was a chest thumping self-appraisal and this continued till the end of the debate with almost all panelists getting frustrated over this self-righteousness of Vaidik. Most journalists who have declared Vaidik issue as a “hysteria” are those who themselves were either the part of the same peace junket or have felt side-lined due to Goswami’s rising fame. Well, it can be perfectly counter-argued as the panel on Arnab Goswami’s show consisted of an ex- Raw Officer, two ex-Army men, three BJP men and one Congress man along with Vaidik. Even if you think that Arnab Goswami is a dumb-wit overblown with Nationalism, does that make even the two army men who know the functioning of ISI much better than we do, also wrong?

The leading English news channels are being considered as “TRP-hungry” fighters. It might be the fact, but who is stopping the Government of India from allowing the NIA to probe this non-affiliated individual Ved Pratap Vaidik? This man is been treated like he is above law and that since, he is a journalist he can even possibly glorify an international recognized terrorist! How did he land up in ISI’s top security zone? Who facilitated his meeting with the 26/11 mastermind? All these questions are not considered to be as “important” ones but rather “hysterical” ones by some in the media and possibly in the government as well.

Many have been arguing with me and will be arguing with me on various social media platforms over the validity of “Goswami’s claims”. Is Arnab Goswami the one who went and had tea with Hafeez Saeed? Did he ask stupid questions like the number of wives Hafeez Saeed had or how the blood-hungry man would react if PM Modi visits Pakistan? Did he call the ill-famous terrorist “Mujahideen-e-Awal”? So, why Arnab Goswami the focal point of Modi lovers, Junket goers and other media person? Is it because he pierced a strong pin into bloated ego of this man Vaidik? Or is it because he threatened to pierce the pin of reality into our delusional balloon of tough stand on terror? Goswami is no saint, he is no God. But he has mercilessly exposed the Governments inefficiency of not acting against Vaidik despite of denying of having any links with him. To the knowledge of many, Congress party leaders especially Manishanker Aiyar had organized this peace delegation of 14 members of which Vaidik was a part of. Yet, the ruling party is not willing to take even a symbolic action on this so-called journalist.

Hafeez Saeed on the other hand has come to the rescue of Ved Vaidik by saying that he was an informal journalist, and so the interview, I believe, consisted of stupid 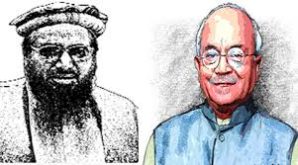 questions.  Saeed’s QAs are not matching to the version submitted by Vaidik. Indian High-commission has denied it’s role in the meeting of these two private individuals as termed by Pakistani Government. So, are the Indian High-Commission  officers enjoying the beauty of  Pakistan instead of doing their job? If so, then why is the Indian government not acting on such lazy officers as well? Is the strict discipline of PM Modi immune to those across the border ? Many will term me to be “hysterical” and some will think this non-issue is been given prime importance because India is becoming a hyper-nationalist society. But unfortunately, for me this has become a litmus test of the disciplinary nationalist Modi Government especially when their own people are demanding action against Vaidik.

One of their leaders, termed Hafeez Saeed as a Kashmiri separatist when he is not even a Kashmiri! This man is a perpetrator of 26/11 and responsible for the latest attack on the Indian Consulate in Afghanistan. Therefore, the core issue is that in this hysteria of Vaidik has he exposed the future of Indian government policy? Is it that this nationalist government has got selective promise of good governance where tomorrow Hafeez Saeed will zeroed do

wn into just a mere wannabe terrorist? Or are they a naive enough to believe that Vaidik might have just “landed” in ISI’s top security zone?  May be these are mere speculations, perhaps, of a hyper-sensitive nature as termed by many. But the visible reluctance and negligence of the government that is refraining from taking even a symbolic action against this individual is bound to fuel suspicion. Although, I personally have great hopes and regards for the Prime Minister and give him my heartiest congratulations for winning presidency for India in the BRICS summit. I choose as a budding journalist and experienced writer not to indulge in hero worship. However, as an Indian analyzing the work done so far by the new government my faith in them is still very strong and hopefully they will not disappoint the likes of me!