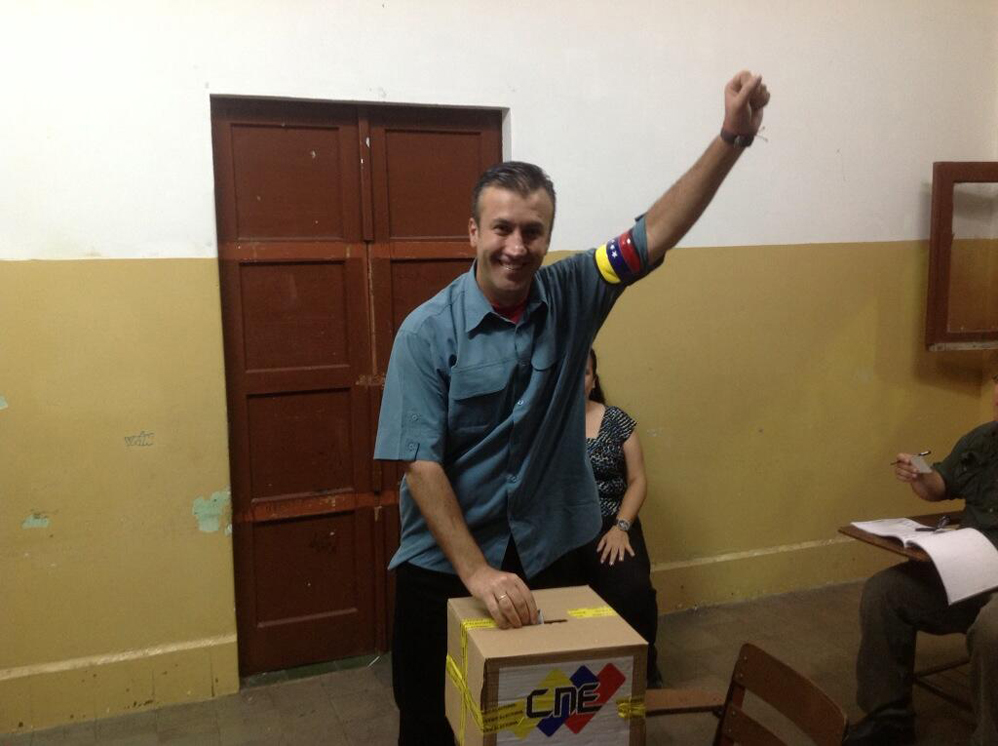 He’s only just been elected to the post of vice president in 2017, but already Tareck El Aissami has been keeping his nation Venezuela in the news for all the wrong reasons. Described by the West as a drug trafficker, money launderer and an aider of terrorism, El Aissami’s mentor, the late Hugo Chavez would be no doubt have been proud!

Remember the name: Tareck El Aissami. If he doesn’t get assassinated beforehand, there’s a very good chance he’ll become the next president of Venezuela, but even in his current role of vice president, he’s making headlines. In February El Aissami even surpassed his own previous level of infamy by getting himself formally blacklisted by the US government, who accused him of “masterminding an international network shipping drugs to Mexico and the US while serving as the country’s interior minister and governor of Aragua state.” Venezuela were subsequently hit with severe US sanctions.

Who Is Tareck El Aissami?

42-year old Tareck El Aissami was born in 1974 in El Vigía, Mérida, Venezuela. His father Zaidan El Amin El Aissami – also known as Carlos Zaidan – is a Syrian immigrant. Zaidan led a Ba’athist party in Venezuela made up of disaffected Middle Eastern immigrants living there, who were in turn supportive of Hugo Chavez during his unsuccessful attempt at a coup d’état of the then Venezuelan leadership in 1992. Chavez came to power seven years later, and would rule Venezuela until his death from cancer in 2013.

Although born, raised and educated in Venezuela, El Aissami is loyal to his Arabic roots and sympathetic to Middle Eastern causes. He reportedly celebrated the 9/11 terrorist attacks, and condemned the US led invasion of Iraqi in 2003.

Thanks to his father’s loyalty to Chavez, El Aissami’s political career was fast-tracked, and  Chavez appointed him Minister of the Interior and Justice in 2009. In 2012 he was also appointed Governor of Aragua, a coastal area of the country with a population of 1.8 million. During his time as governor, Aragua’s police force became infamous for its violence and brutality. In January 2017 in what was seen as a controversial, highly contentious move, Venezuela’s president Nicolas Maduro appointed El Aissami to the position of Vice-President.

Even more controversially, President Maduro then granted him economic decree powers as well, in effect granting El Aissami powers that rivaled Maduro’s own. El Aissami now has decree over “everything from taxes to foreign currency allotments for state-owned companies, as well as well as hiring practices to state-owned enterprises”. Needless to say, with Maduro clearly looking at an exit plan, this ruling has made El Aissami possibly the most powerful man in Venezuela.

Why Is El Aissami A Threat To The US?

El Aissami clearly has a deep dislike for the United States, fostered first by his Syrian Ba’athist father, and in later years by Hugo Chavez, who was a persistent pain in the a$% to successive US administrations. The opinion held by the US authorities is that if El Aissami can threaten the US by aiding terrorism or drug trafficking directed toward America – all the while making a profit from those ventures – then he is fine with it.

Business website PassportReviewer.com recently featured an article that claimed El Aissami had given out 173 Venezuelan passports to Middle Eastern individuals, some with Hezbollah connections. If this is true, and no less than CNN claim to have documented proof that it is, El Aissami is in effect granting terrorists the freedom to travel as Venezuelan citizens and have visa-free access to more than 130 countries worldwide – including the 28 nations of the EU and Central America including Mexico.

In February 2017, the US government took the step of blacklisting El Aissami and hitting Venezuela with severe sanctions, claiming he was a major drug trafficker and money launderer. El Aissami, according to the US Department of the Treasury, was being paid protection money by Venezuelan drug kingpin Walid Makled Garcia to guard drug shipments heading first to Mexico and the vicious “Los Zetas” cartel and then on to the US

The United States also voiced their concern that El Aissami’s appointment to the position of vice president put him in line to become Venezuela’s next leader. “This is extremely troubling given his alleged ties to drug trafficking and terrorist organizations”.

Meanwhile, El Aissami hit back on Twitter, saying: “We shall not be distracted by these miserable provocations. Truth is invincible and we will see this vile aggression dispelled.”

Filed under: News, Politics
Share Tweet Pin G Plus Email
previous article: Iran’s Middle East Aggression to Come to a Halt
next article: Food combinations that you eat but you should not!