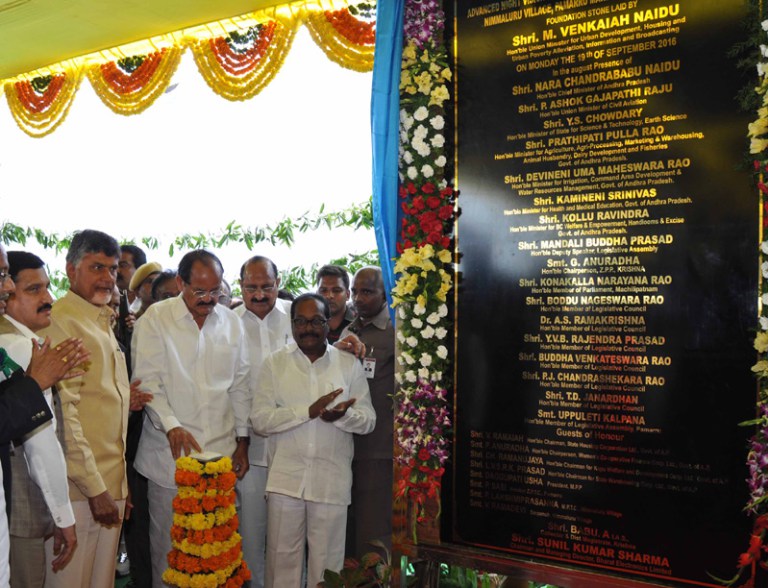 Assures Employment To Locals In The Upcoming Factory

Nimmaluru (PIB-GR-TYP-BIN): Union Minister for Information & Broadcasting, Mr. M. Venkaiah Naidu laid foundation stone for the Bharat Electronics Limited Advanced Night Vision Products Factory at Nimmaluru, Pamarru (M) in Krishna District of Andhra Pradesh on Sep 19. The factory, which is coming up in 50 acres is likely to be completed by 2018 at a cost of Rs. 300 crore and is likely to provide employment to over 1200 people.

The factory also has a scope for further investment of up to Rs 1000 Crore. BEL factory is presently operating from a campus of five acres. Once completed the Advanced Night vision facility will have state of the art infrastructure like Assembly Hangars, ultra-high clean rooms for assembly of devices, modern optical workshops with precision SPDT, CNC optical fabrication machines and high performance durable thin film.

Speaking on the occasion, Mr. Naidu urged the people to be cautious with those creating hurdles to the development of the State. He said that the Centre has focused on the development of State and is paying special attention to its progress by granting special financial assistance. “People are more intelligent than the political leaders and they realize what is true and what is not”.

He urged the BEL management to provide employment to the locals in the new factory and assured that he would take up the issue with the defence minister. The Prime Minister has focussed on “make in India” products so that people get employment he said. The Union Minister further said that of the 28 demands made by the people of the State in the wake of bifurcation, the Centre has already agreed upon 27 demands except the special category status which is not possible as it was not included in the bifurcation bill and 9 more states are demanding it.

Andhra Pradesh State is to become hub for manufacturing of defence products with over Rs 6,600 Crore worth defence projects sanctioned, he said. He reiterated that the Centre had assured special package to the State which would be more than what Special status would give. He appreciated the efforts of the Chief Minister Nara Chandrababu Naidu for earmarking 50 acres of land to the BEL management for establishing the factory. He also said that another defence project is in final stage of sanction to be set up Bobbili. The Union Minister pointed out that industrial development is as important as agriculture for development and they are like two eyes.

Chief Minister of Andhra Pradesh Mr. Nara Chandrababu Naidu said that his government is making all efforts to develop the State and accelerate growth. He appreciated the efforts of Union Minister Venkaiah Naidu for getting the projects although he doesn’t represent Parliament from the State. Minister of State for Science & Technology and Earth Sciences Mr. Sujana Chowdary , Member of Parliament Mr. K Narayana, BEL Chairman and Managing Director Mr. Sunil Kumar Sharma were also present.