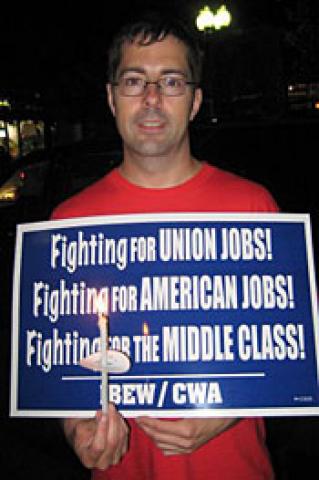 Negotiators returned to the bargaining table today in an effort to agree on a fair contract for the 85,000 employees who work for Verizon along the East Coast from Massachusetts to Virginia.

Just minutes before the current contract was set to expire Aug. 2, the workers, members of the Electrical Workers (IBEW) and the Communications Workers of America (CWA), agreed to “stop the clock” and postpone a strike while negotiations continue. Last month, members of both unions voted to authorize a strike if a fair agreement isn’t reached. CWA President Larry Cohen says:

Last week, the workers launched a series of “rolling” rallies to build solidarity for the workers, 70,000 of whom are represented by CWA and 15,000 by IBEW. Local AFL-CIO labor councils and state federations are strongly supporting the Verizon workers in the Northeast.

Carrying signs proclaiming “Do not underestimate us” and “We want a fair contract,” the workers rallied in some 150 cities. On July 31, more than 1,000 workers rallied at Verizon’s New England headquarters in Boston, led by motorcycles. The same day, members of IBEW Local 2336 held a rally and cookout in Washington, D.C., and members of both unions rallied in Newark, N.J.

On the eve of expiration of the contract with Verizon, workers held a candlelight vigil in Boston. Says Ed Fitzpatrick, president of IBEW Local 2222:

Our parents and grandparents sacrificed to make this a company with good jobs and benefits. We won’t turn our backs on them. We will stand united for as long as it takes.

The unions are working hard to preserve the quality wages and benefits that telecom workers have achieved through 35 years of collective bargaining, but they also are keeping their eye on the future of the industry. As Verizon transitions from a traditional phone company to a high-tech provider of video, Internet and wireless communications, workers are fighting for the union jobs of the future.

A key issue in the negotiations includes Verizon’s outsourcing the jobs of union members in New York and other states to nonunion call centers in the United States and in India, Mexico and the Philippines. The workers also are fighting company proposals to cut back on health care benefits. Michael Garry, president of CWA Local 1126 in Utica, N.Y., puts it this way when he spoke with the Syracuse Post-Standard:

You can have the best contract in the world, but what good does it do you if you don’t have a job?

Stressing the importance of the show of solidarity, Myles Calvey, business manager for IBEW Local 2222 and chair of the IBEW Telephone Workers’ Bargaining Committee, said in a message to members:

The main reason management has been forced to deal with our issues is because the membership has shown them that we are united and determined to win yet another contract that takes us into the future.