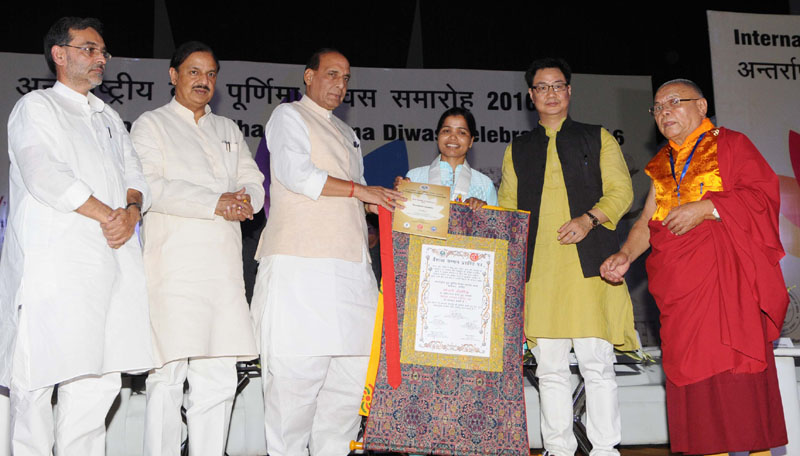 To mark this most auspicious occasion, various Buddhist bodies and organizations of India have come together under the aegis of the Ministry of Culture in collaboration the International Buddhist Confederation (IBC) to commemorate and celebrate the day in a grand manner. It was announced last year by Prime Minister Narendra Modi, the Chief Guest at the Buddha Poornima celebrations that the day will be commemorated and celebrated as an Annual event by the Nation.

This event was marked by Song by Chakma Buddhist society; screening of a film on Buddha; Dharma talk and meditation; Mangalacharan-chanting of Sutras in Pali and Sanskrit traditions; and Song by Ladakhi children’s choir from Mahabodhi school Chandigarh.

Addressing on the occasion, Mr. Rajnath Singh said that pious Vaisakhi Poornima is described as Buddha Poornima because Bhagwan Buddha’s Birth, attainment of Sambodhiprapti and Mahaparinirvana all fell on this day of Vaisakhi Poornima. Bhaghwan Buddha was a very large hearted person and solutions to all problems of mankind are contained in his teachings. Babasaheb Bhimrao Ambedkar adopted Buddism as he was greatly influenced with the sacred teachings of Bhagwan Buddha. He wished all Buddhists worldwide on this auspicious occasion.

Dr. Mahesh Sharma in his address said that out of Eight Sacred places of Buddhism, Seven places are situated in India. Ministry of Tourism has launched a programme namely “Swadesh Darshan” which has a special component of “Buddhist Circuit” which connects all religious places of Buddhism very conveniently. He assured the people that all his three ministries viz. Culture, Tourism and Civil Aviation will wholeheartedly try their best to make it a success.

Mr. Kiran Rijuju, Minister of State for Home Affairs said that there is no match to our spiritual powers. Government of India attaches great importance to Buddh Poornima and now onwards it will be celebrated every year like this.

Mr. Upendra Kushwaha, Minister of State for Human Resources Development said that the messages of Bhagwan Buddha are purely scientific and these contain the solutions of all problems of mankind. We have to spread his messages worldwide.

UN recognizes the importance of this day. The UN Day of Vesak Celebration is internationally a cultural and humanistic festival of the United Nations International Organizing Committee. The established process of this celebration commenced in year 2000.

Buddha Purnima or Vesak is regarded as the thrice-sacred day that celebrates three momentous events in the history of human kind, regardless of the country or Buddhist tradition to which we belong, namely Buddha’s birth, sambodhiprapti and mahaparinirvana. India is the land of the origin of Buddha dharma, and home to three of the four holiest Buddhist sites, namely Bodhgaya, Sarnath and Kushinagar, and numerous others connected with Buddha’s life and thereafter. Buddha was born as Prince Siddhartha in Lumbini in present day Nepal. He attained sambodhiprapti in Bodhgaya in Bihar, and mahaparinirvana in Kushinagar in Uttar Pradesh.

India is home to sacred Buddha Relics currently housed in museums. These relics are objects of veneration, and need to be consecrated in a sanctified manner. One such initiative is the proposed construction of a Grand Relic Vihara for the Buddha Relic found at Devni Mori in Gujarat. India is also the repository of ancient knowledge and spiritual wisdom. People from all over the world come to India to seek and learn its spiritual traditions. India can therefore look forward to reviving its preeminent status as the spiritual leader of the world.