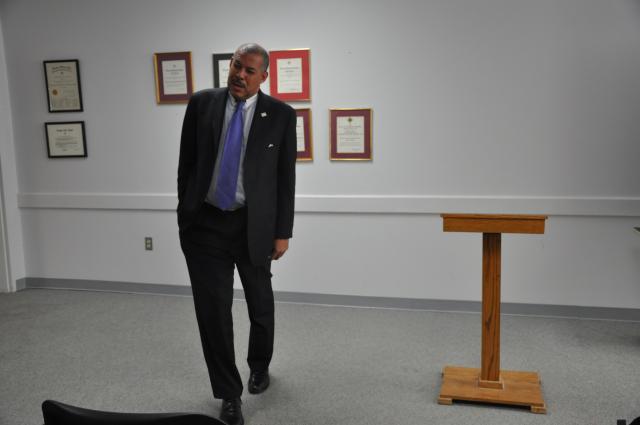 RICHMOND – It would make perfect sense for multimedia journalist Charles F. Robinson III to be an avid Twitter user. With a strong blogging history and Facebook presence, Robinson seems like the quintessential social media Tweeter. However, Robinson can’t seem to wrap his mind around a critical Twitter feature.

“I have a really weird reason for not using Twitter—I just can’t write only 140 characters,” Robinson said.

The Association of Black Communicators and the School of Mass Communications at VCU organized the event where Robinson spoke about his 30 plus years of experience as an African-American journalist as well as gave insight to the mass communicators of tomorrow.

Robinson discussed his presence in social media, such as blogging on BlogSpot, BlogSpot Radio, and Facebook but has yet to master tweaking tweets down to less than 150 letters.

With careers held in radio, advertising, print journalism, as well as television, Robinson still keeps his plate full today. He hosts webinars, and is an enthusiastic user of Skype, which he has used during bicoastal conferences, including recently for the National Association of Black Journalists.

Junior print journalism student Jenobia Sanders attended the event because she felt she could relate to Robinson and his insights.

“As a journalism student, I tend to gravitate toward speakers who have similar backgrounds.  Since I want to be a working journalist after graduation, I wanted to hear the trials and tribulations of someone who had to navigate the ranks to achieve success in the field. We wanted our peers to feel inspiration, as well as determination, after hearing Mr. Robinson’s unique story of perseverance,” said Sanders.

Known as an expert on the African-American political scene, Robinson cited an interview with President Barack Obama in 2006 as inspiration for starting his first blog, Charles’s Black Politics Blog.

“It came out of an e-mail I sent out to all of my friends. It was a blog about, ‘Charles, what are you seeing at these national conventions that nobody else is seeing?’” said Robinson.

He discussed the absence of African-American politicians present in national political conventions and how that shaped his perspective and blogging habits as an expert on black politics.

He stressed the point of journalists of today and tomorrow being multitaskers and truly embodying a jack of all trades status. Robinson made it clear that hard-working multitaskers certainly have an edge in the communications field.

“I never ever do one thing….If you can do a lot of different kinds of things, what you do is you make yourself invaluable to people.”

This story is for subscribers to VCU’s Capital News Service. If you have questions or comments, contact Jeff South at jcsouth@vcu.edu or 804-827-0253 or your CNS reporter.