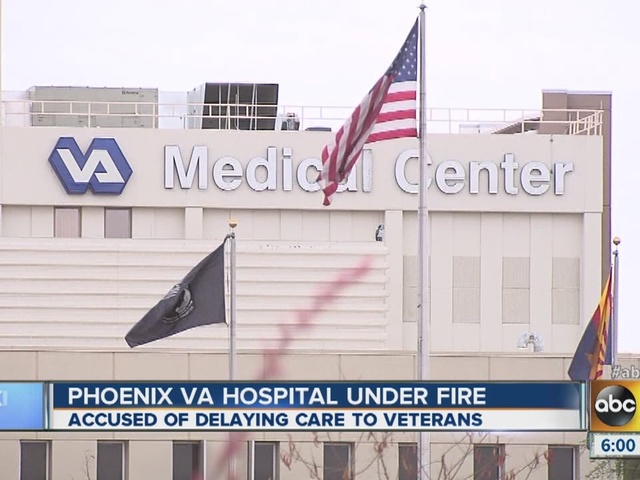 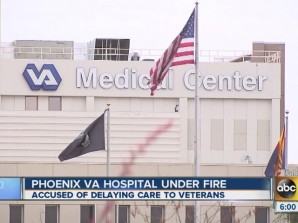 Ground Zero: Phoenix VA hospital where 40 veterans died while waiting to be seen by doctors.

On May 16, 2014 Senator McConnell requested permission to address the Senate regarding the Veterans Administration.

Here is some of what Senator McConnell had to say:

“Later this morning Secretary Shinseki will testify on stories that emerged several weeks ago about administrators at the VA hospital in Phoenix falsifying medical records to conceal delays in providing care to veterans. In the wake of these reports similar stories from Wyoming, North Carolina, Missouri, and Texas have come to light about employees using similar tactics to conceal backlogs in medical care. The questions awaiting the Secretary will be tough, but this is his job. The American people are demanding and deserve answers to these questions.

One thing I will be listening for today is whether Secretary Shinseki states a belief that the VA is, in fact, facing a systemic crisis because just this morning the Wall Street Journal reported that his Department has made “minimal progress at best” on a host of problems identified in 2012 by the nonpartisan Government Accountability Office–“minimal progress at best.” That is how a nonpartisan GAO official described it…

Last year I called the Obama administration’s veterans backlog a “national disgrace.” I have also made several appeals to the Secretary. I know, of course, I was not the only one. Yet the initial reports of the shocking situation in Phoenix indicate that things have only gotten worse. With similar stories now filtering in from other parts of the country, it is getting harder to believe this is not more of a sort of systemic, administration-wide crisis. The Veterans’ Administration needs to get to the bottom of how widespread the problem has become.

My concern is that the Obama administration will treat this scandal the way it does all the others–like a political crisis to get past rather than a serious problem to be solved. We know the President appointed a member of his staff yesterday to look into it. That is a start, but if the President is truly serious, he needs to treat these stories at least as seriously as he did the ObamaCare Web site fiasco when he pledged his complete attention and the full force of his administration to do whatever needed to be done. That was on the Web site fiasco when he let it be known that his people would not rest until a solution was worked out. Incredibly, so far the President has made no such pledge when it comes to the treatment of our veterans. The President needs to understand that our veterans deserve at least as much attention as a Web site–at least as much attention as a Web site. In fact, they deserve a heck of a lot more.

This is a really big deal. It is our job as Senators to get to the bottom of it. We need to ask the tough questions. We need to uncover the truth. Any misconduct found at VA hospitals should be met with swift punishment.

Administration officials need to be held accountable because America’s ill and wounded veterans have already paid a price. They have already paid a price. They have a right to expect that our country will be there when they need help. If we break faith with them, we are breaking faith with the recruiters who made commitments to the next generation of American military leaders. All of those people have made commitments. The recruiters, the military leaders have all made commitments. As one of my colleagues put it, American veterans ought to be first in line–first in line–for the best care, not pushed to the back of the line for what they are getting.

So our joint mission, whether we are Democrats or Republicans, should be to get to the bottom of the Obama administration’s veteran crisis swiftly and fix it. It means holding officials accountable. It means getting serious about solutions, such as Senator Rubio‘s bill that would make it easier to remove high-level VA employees for performance failures. I am proud to cosponsor that legislation. I know some of my colleagues will have other good ideas in the coming days and weeks too. The point is, that is where our focus needs to be. We owe it to every veteran who has served”, said McConnell.