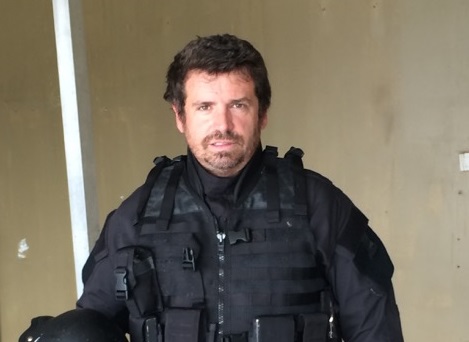 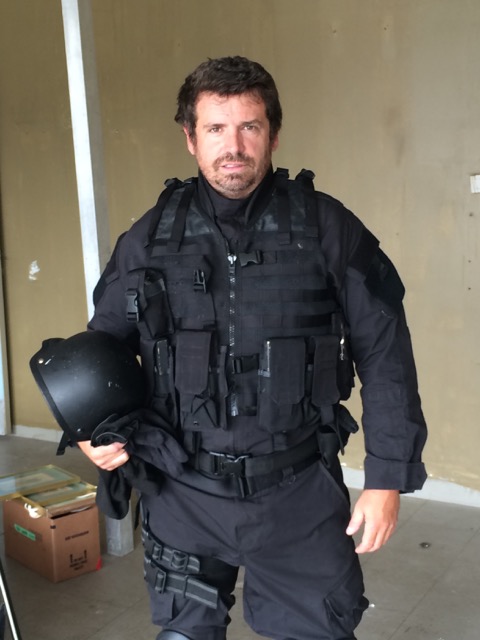 For more than 25 years, Carson Manning has brought his stunt performing and acting talent to film and TV productions.

The inspiration was sparked for Carson Manning when he was growing up watching films and TV shows in Toronto with his grandfather, Frank Billing. Manning was raised by Billing and by his mother, Pixie, after his father left when he was born. Manning and ‘Grandfer’ took it all in together, from classics to sitcoms to reruns, and everything in between. The magic of moviemaking and television stirred an irresistible urge to be a part of it all.

“As a small boy, I never missed watching the Academy Awards, even till now,” Manning said. “I always dreamed I would work and act in the film industry. I always enjoyed the amazing talent I would see and how actors could become someone else.”

What started as a boyhood dream would materialize into a rare reality. Manning’s destiny wasn’t to view from the audience, but rather to be an on-screen figure entertaining them. He tapped into the perilous world of stunt performing and is also a formidable actor of praiseworthy merit nearly 30 years experienced.

This year, Manning served as stunt performer, stunt driver and stunt rigger for the highly anticipated “Suicide Squad” from writer-director David Ayer. Warner Bros. is releasing the picture globally August 5 and it features a star-studded cast including Will Smith, Jared Leto, Margot Robbie and others.

Manning has collaborated with and engaged his talents alongside a list of names analogous to the Hollywood Walk of Fame including Oscar winning actors Denzel Washington, Rod Steiger, Timothy Hutton and Halle Berry. Other notables Manning has worked with include the late comedy legends George Carlin and John Candy, as well as the famed Second City “SCTV” cast, Golden Globe winner Jim Carrey, Oscar nominees Will Smith, Hugh Jackman and Sir Ian McKellen and “Star Trek” icon Sir Patrick Stewart.

First showing a flair for performing when he was going through public school, Manning was inspired by classic comedy shows such as “Saturday Night Live,” the Dean Martin Roast and “The Tonight Show Starring Johnny Carson.” He actually went to school St. Clair Jr High School with Kiefer Sutherland in Toronto and developed a reputation as a class clown who found himself in trouble often for disrupting lessons with improv and mime skits of his own creation. When the charades caught the attention of Manning’s school principal, he was made to go from class to class performing the skits that otherwise resulted in discipline. Manning would go on to take improv and comedy classes, but never ventured into the world of stand-up. His performing future laid elsewhere.

Many stunt performers come from a martial arts background that allows them to deliver the needed action sequences on film with authenticity. Manning’s path instead included stints in athletics that proved similarly befitting. He exceled in track and field, and has played hockey since he was 4 years old. When he was young, his grandfather gave him a unicycle that sharpened his balance early on, and Manning also participated in dancing, horseback riding and dirt biking.

“I used to love driving anything and fast,” he said. “So with all that, it gave me some very great skills that I learned to perfect for what I ended up doing later in life.”

Acting, though, came before stunts. Manning was initially steered to break into the business by taking extra work. One of his very early roles came in 1987 where he played a gang member on the award-winning CTV crime drama, “Night Heat.” A year later, Manning played a rioter on an award-winning CBC series called “Street Legal.” That inception to filmmaking was all Manning needed to discover his true passion.

On TV, he would go on to act in William Shatner’s “TekWar,” Paul Haggis’ “Due South,” HBO’s Golden Globe nominated “Gotti,” Fox’s hit “Goosebumps” series, the Stephen King, Emmy-winning mini-series, “Storm of the Century” and more. Manning got his start in film acting in 1994 when he played prisoner characters in both “Car 54, Where Are You?” with David Johansen and John C. McGinley, and in “Trapped in Paradise” with Nicolas Cage, Jon Lovitz and Dana Carvey. He would go on to act in the cult comedy classic “Half Baked” starring Dave Chappelle, in Bryan Singer’s “X-Men” and in “The Hurricane,” from seven-time Oscar nominated producer-director Norman Jewison (“Fiddler on the Roof,” “Moonstruck,” “Jesus Christ Superstar”).

In “The Hurricane” – that stars Denzel Washington as Rubin “Hurricane” Carter, who was wrongfully imprisoned for murder – Manning played a prison guard and shared scenes with Washington. In one on-screen instance, Carter meets Canadians in prison for the first time who are trying to help him. Carter gets mad and tries to leave his table when Manning’s character gets in his way and assures him to relax.

“It was a nice, moving scene,” Manning said. “It was a pleasure to work with him and of course having Norman Jewison direct me. It was a big thrill working and acting for Mr. Jewison.”

Manning’s stunt performing career is littered with coveted credits both on TV and the big screen. He got started with stunts in 1993 on CBS’ Gemini-nominated action series, “Top Cops.” Since then, Manning has performed, rigged, coordinated and doubled stunts for shows such as FX’s “The Strain,” the CW’s “Beauty and the Beast,” Syfy’s “Defiance,” History’s “Gangland Undercover,” the CW’s Emmy-nominated “Nikita,” Syfy’s “Alphas” and more. Manning has most recently performed stunts for the independent action film, “Gridlocked,” starring “Prison Break” star Dominic Purcell. He’s also done stunts for and plays an assassin in NBC’s forthcoming “Taken” prequel series based on the film franchise that starred Liam Neeson.

Stunt coordinator/performer Brian Jagersky has worked on more than 100 different films and TV series including “The Incredible Hulk,” “300” and “X-Men.” Jagersky and Manning have collaborated in delivering stunts for several productions, namely “Shoot ‘Em Up,” “Pompeii” and for the Emmy-nominated CW action series, “Nikita.”

For “Nikita,” Jagersky served as stunt coordinator and said, “Carson performed stunts in many key scenes in the show, demonstrating his extraordinary prowess in precision driving and fighting skills. One of his most notable action scenes was a scene where he breaks into a house to look for someone. After stepping into a kitchen with all-glass windows, machine guns and explosions begin bursting the windows and Manning gets hit causing a big chest explosion, and then gets jerked across the room backwards into a large gas stove. This scene was incredibly performed and demonstrated his exceptional technique.”

Training and fine tuning the body is a necessity for stunt performing, but it doesn’t stop there. “As a stunt man, you always have to be training and keeping your body in tune and you have to have the skills to accomplish stunts that you are called upon to do,” said Manning.

Scott directed Manning in episodes of “The Strain” and “12 Monkeys.” “In “The Strain,” Scott said, “Mr. Manning performed wonderful stunt acting that totally brought the episodes to life with his natural way of simulating action. He played a father being harassed by a group of marauders who ends up getting away in a car with his family and crashes into stuff along the road. On the episode of “12 Monkeys,” Carson played a scientist who gets killed in a cross fire of an important scene. Mr. Manning is a stunt performer who has done wonders in both the film and television industry, and is certainly well-known and revered to come out of Canada.”

“As a stunt double, I work very close with actors so they feel confident that they have a double who is going to make them look good, as well as be there for them when they need me,” he said. “Sometimes the lead actor will do his own stunts, so it is my job to make sure the actor is safe along with the stunt coordinator. I will make sure the actor is padded in case they have to fall down or if the actor is throwing a punch or taking a punch, I demonstrated the proper way to execute that without actually getting punched in the face, but make it look like it did happen.”

Combining Manning’s dual talents – stunt performing and acting – makes for an invaluable qualification when it comes to film and TV production that’s few and far between. It’s not often casting decision makers elect stunt performers for character roles, but the paradox is one defied by Manning’s career achievements. He brings a wealth of know-how from stunt perspectives and has also proven to be a talented asset as an actor, a notion that makes budgeting sense for producers.

“Being a good stunt performer who can act is great for a production,” Manning said, “as they save money by having an actor who can do his own stunts, as well they do not have to spend more money bringing in a separate double for the actor too.”

In looking back from when he was a boy watching movies and TV shows with his grandfather to where he’s ascended to today, Manning says, “All I can say is I love the business, I feel very fortunate and to be a part of it has been a thrill.”

The journey continues for Manning, who has been attaching to act and perform stunts for forthcoming projects in 2016 including writer Sebastian MacLean’s feature film, “Tuff,” writer-director Travis Grant’s “Time Man” and other exciting projects that are presently under wraps.

Filed under: Film, Lifestyle
Share Tweet Pin G Plus Email
previous article: Shop Kurtis Online – Get the Ravishing Look
next article: I Promise To Fight For Punjab And For Its Youth : Rahul Gandhi