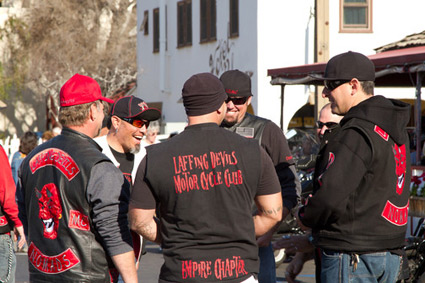 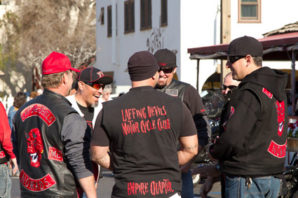 Members of the notorious Laffing Devils motorcycle gang talk smack to each other at a meeting of members in San Diego, California in 2013.

Anyone familiar with the reality based TV show on Discovery Channel called “The Devil’s Ride” knows that veterans are prominently represented in the two motorcycle clubs featured on the program.

The veterans are part of a subculture within the gangs or clubs which engage in all sorts of nefarious activities including, but not limited to: assault, robbery, blackmail, extortion, and even acts of domestic terrorism.

According to a recently released FBI report, Gang-related activity in the US military is increasing and poses a threat to law enforcement officials and national security.

Both the Sin Mob and the Laffing Devils claim they do what they do for “honor, respect and brotherhood”, but it has nothing to do with that.

Both clubs also display the Marine Corp flag on their clubhouse walls – which is a total abomination, as far as I am concerned.

These members come into the club with prior military and combat experience, from Vietnam and the Gulf wars and Afghanistan.

These veterans represent a growing and troubling trend for America – one that the Pentagon refuses to acknowledge or deal with outside the military. I suppose they have their hands full with those gang members already withing their organization – which is a huge problem nationwide.

Veterans are also represented in one percent-er clubs and gangs across America.

An informal survey in 2013 shows veterans make up about one third or less of the membership of one percent clubs, including the Hell’s Angels, Vagos, Free Souls, Bandidos, Highwaymen, Warlocks, Sons of Silence, Outlaws, Pagans, Mongols…just to name a few.

Some have suggested that veterans who bring dishonor to themselves and their communities by joining gangs, outlaw motorcycle clubs and violent criminal organizations and commit felonies such as murder and rape should lose their veteran benefits.

Others suggest that such a deterrent measure would have little or no deterrent effect on veterans from joining such organizations – but it might make them think twice before they kill or rob someone.

We floated this idea past a few prominent members of the US House of Representatives, including top leadership of both political parties by email  and no member would respond to back to us  on this subject. I assume they didn’t consider this a good idea at this time?

Other Motorcycle gangs affiliated with organized crime include the Vagos, Hell’s Angels and the Sons of Silence.

The Vagos Motorcycle Club for example was started in San Bernardino, CA in the 1960’s. Members of the club often wear green and bear a patch of the Norse god Loki riding a motorcycle. The club has approximately 24 chapters spread across the western United States in states such as Arizona and Nevada and also 3 in Mexico. Many of its members are combat veterans with extensive military experience. Many law enforcement officials I talk to have confirmed that as a reality.

*The Vagos have been the subject of several investigations by the FBI and the ATF for illegal activity such as the production and distribution of methamphetamine, murder, money laundering and weapons violations. A highly coordinated investigation in March of 2006 led to the arrests of 25 Vagos members and their associates in what has been labeled as the largest investigation in Southern California’s history.

*The Sons of Silence are another “1%er” motorcycle gang that was founded in Niwot, Colorado in 1966 and featured in a 2009 episode of Gangland on The History Channel. Since 1966 The Sons of Silence have spread across the United States, with concentrations in the eastern U.S. They also have several chapters spread throughout Germany.

The Sons of Silence have adopted the motto “Donec Mors Non Seperat”, which is Latin for “Until Death Separates Us”. The club patch has been adopted from the American Eagle logo used by the Budweiser beer company and bears an eagle superimposed over the letter A with their motto underneath.

In October of 1999, 37 members of the Sons of Silence were arrested on drug trafficking and illegal weapons charges during one of Denver’s largest federal undercover operations. During the raids, The ATF seized 20 lbs. of methamphetamine, 35 firearms, four hand grenades, 2 silencers as well as cash and motorcycles.

The Outlaw Motorcycle Club is more notorious and one of the oldest clubs in the US. The gang started in Matilda’s Bar on old Route 66 in McCook, IL in 1935. Using the insignia on Marlon Brando’s leather jacket in The Wild One as inspiration, the club adopted the skull with cross pistons as their official club patch. Since the club began over 70 years ago their chapters have spread widely across the United States and have been well established in Australia, Asia, Europe and North and South America.

Harry Joseph Bowman, The World Leader of The American Outlaw Association (A.O.A.), was the international president of The Outlaws Motorcycle Club and presided over 30 chapters in the U.S. and 20 chapters in 4 other countries until he was sent to prison for 3 murders in 1999 after being on the F.B.I’s Top 10 Most Wanted Fugitive list in 1998.

Across the globe members of The Outlaws have been suspected, arrested, tried and convicted of countless crimes from prostitution, trafficking in narcotics and stolen goods, arms dealing, extortion and murder.

The list of motorcycle gangs abound. And veterans are represented in all of them. This is real.