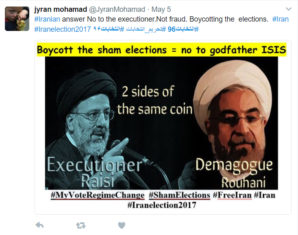 As the presidential elections in Iran get closer, an increase in social media activities on different online platforms is raising concerns about the authenticity of the whole election process. Iranian youth have been actively promoting campaigns against the elections and calling them a sham. There have been heated arguments and debates all over Facebook, Twitter and Telegram even though the Regime officials have tried their best to impose restrictions but the youth have somehow come out on the social media to show their disgust. The most prominent among those who want to boycott the elections are PMOI supporters. They have been chanting slogans against these so-called elections and posting banners on the streets of Tehran and neighbouring cities.

YouTube videos and pictures are being published to show support towards boycotting the elections. And the response they have generated from the angered officials of the regime is a clear sign of their unhappiness. They have sent out warnings and ordered arrests for all those who post, support or show solidarity towards such videos, pictures, banners and slogans.

The Interior Ministry has gone to the extent of warning activists that publication of defamatory content or leaking of secrets of presidential candidates in cyberspace will have its consequences. That the government will not allow it and those convicted will be punished according to the Islamic Penal code and cybercrime laws. A statement was made public by the Prosecutors office in Khorasan Province stating that “administrators of cyber networks must uphold red lines of the elections. Otherwise, violators will face legal repercussions.”

In support of this statement, the Tasnim news agency of the regime published an article on 8TH May titled “Four Techniques of Cyberspace Rumours” to show their discontent about the activities happening on the social media.

Videos are constantly being uploaded to Youtube every day in which supporters of Maryam Rajavi are see printing out her pictures and banners and placards. Some videos are showing views of Iran’s streets where her supporters have hanged banners of her. Slogans such as “Down with the regime, Hail Maryam Rajavi” are shown around the city. All these videos are showing support to the PMOI leader and asking for boycotting of elections and claiming them as a sham.

The regime officials both high and low ranking have utilised every opportunity to publicly emphasise that participating in elections is somehow a “religious duty” and that the boycott should not be taken seriously. They are trying to link religion to elections in a desperate attempt to keep the election process undisturbed. The democratic process of election has become a mockery by suggesting voting is a religious duty. Despite all the oppression against the call for boycott, the supporters are installing placards, distributing videos, statements and banners in different cities and on the main highway roads.

All the warnings and threats issued by the regime are only adding fuel to the fire as more and more people support the call for a boycott of elections. Social media users have exposed the administration’s attempt to confront the boycott and are making a mockery of their efforts on the internet. They are trying to showcase the hollowness of this sham election and asking the public to take a stand for their rights by answering the call for boycotting. 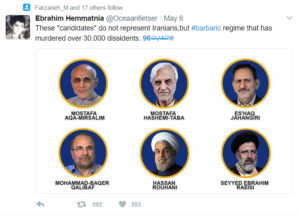