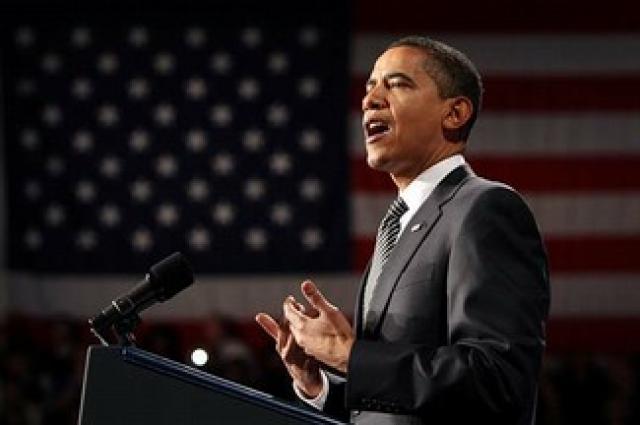 A week after Treasury Secretary Timothy Geithner’s plan to resurrect the financial system landed with a thud, President Barack Obama called his own number Wednesday to unveil the new administration’s ambitious effort to rescue the housing market. In a speech in Arizona–a state that had the nation’s third-highest foreclosure rate in January–Obama detailed a multipronged initiative that aims to enable up to nine million families avoid foreclosure, while halting the drop in home prices by as much as $6,000 a house. "In the end, all of us are paying a price for this home mortgage crisis. And all of us will pay an even steeper price if we allow this crisis to deepen," Obama told the audience. "But if we act boldly and swiftly to arrest this downward spiral, every American will benefit." Here are the five things you need to know about the Obama housing fix:

1. Refinance mortgages: Here’s a key obstacle to extricating the nation from the current mortgage mess: Although mortgage rates are near historic lows, the home owners with the greatest need to access the lower rates aren’t able to benefit from them. One reason for this is that Fannie Mae and Freddie Mac–which own or guarantee a huge chunk of the mortgage pie–typically can’t guarantee refinancing for home loans that are valued at more than 80 percent of the property’s value. And with home prices plunging, an increasing number of homeowners fall outside these parameters. The Obama plan would scrap this restriction, enabling as many as five million people with mortgages owned or guaranteed by Fannie and Freddie to refinance into lower-cost loans, the president said.

Analysis: While the plan is a great deal for eligible homeowners–many of whom will see their monthly mortgage bills slashed–it carries significant risk for the government, says Mike Larson of Weiss Research. "You are making a bet with taxpayer money that house prices are going to rebound [and] that if that person goes from [an interest rate of] 6.5 percent to 6 percent, they are never going to default and that everything will be hunky-dorey," Larson says. "That’s a big bet to be making with taxpayer dollars, considering Fannie and Freddie are in conservatorship."

2.Reduce monthly payments: The plan also includes a $75 billion effort to lower monthly payments for struggling borrowers to no more than 31 percent of their income. The cost of the reduction–which could come from lowering the principal on the loan–would be shared by the government and lenders. As an incentive, servicers will be paid $1,000 for every modification and get an additional up to $1,000 fee each year for as many as three years if the borrower stays current on the loan. Homeowners, meanwhile, will get up to $1,000 knocked off the principal of their loan each year–for up to five years–simply by paying their mortgage on time.

Analysis: From the perspective of a taxpayer, it could be troubling to see such cash payouts going to lenders and struggling borrowers, Larson said. "An average buyer who may be sticking with their loan may be saying, ‘what about me?’" Larson said. "Especially when it comes to this idea of the $5,000 to reduce someone’s principal. You could philosophically say, ‘Why doesn’t the government reduce everybody’s principal?’" At the same time, Larson said the generous incentives could be successful convincing servicers to reduce borrowers’ mortgage payments. He expressed concern, however, that lenders and servicers would chose to cut borrowers’ monthly payments by extending the terms of the loan or by lowering the interest rate, rather than by reducing the principal, which he considers an important step to achieving the government’s objectives.

3. Uniform modification guidelines: At the same time, the administration intends to generate uniform guidelines for loan modifications. The guidelines, which Obama said would be in place in two weeks, would be used by Fannie and Freddie, and the administration will work to get them implemented throughout the mortgage industry. In addition, all financial institutions receiving bailout cash from the government going forward will be required to use them as well.

Analysis: Richard Moody, the chief economist at Mission Residential, says that the streamline modification proposal has the potential to be effective. Its impact on the housing crisis, however, will depend on the details of the standards. "It’s pretty well-documented that to date, modifications have meant many things to many lenders," Moody says. "Having them uniform and having them more aggressive–such as some of the steps [Obama has] proposed–is obviously a step in the right direction."

4. Keeping mortgage rates low: The administration is also looking to ensure that mortgage rates remain attractive, which could help pull more buyers into the housing market. To that end, Obama said the Treasury Department would double, to $400 billion, its funding commitments to Fannie and Freddie in an effort to ensure they have the resources they need to support the mortgage market. At the same time, Fannie and Freddie will increase the size of their retained mortgage portfolios by $50 billion to $900 billion.

Analysis: Keith Gumbinger of HSH Associates said the increase in Fannie and Freddie’s retained portfolios could result in modestly lower mortgage rates. "It could provide some downward pressure [on mortgage rates]," Gumbinger said. "But $50 billion isn’t all that much."

5. Bankruptcy reform: The president also expressed support for allowing judges to alter the terms of mortgages on primary residences during bankruptcy proceedings. Supporters of such a measure argue that it is an effective tool to help struggling borrowers stay in their homes.

Analysis: But Moody argues that this measure could work against a recovery in the housing market by increasing borrowing costs for consumers. Allowing bankruptcy judges to alter the terms of the original mortgage contract makes home loans more risky, he said. As a result, "anyone who is going to be either lending or investing under these conditions is going to demand more protection in the form of higher fees or higher interest rates," he says. Those expenses will then be passed on to the consumer in the form of higher borrowing costs, Moody says.