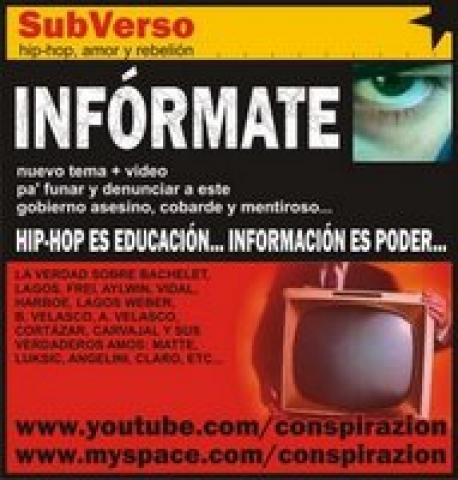 SubVerso (SubVerse) is the artistic name of Vicente Durán, author of Inform Yourself, a political critique Hip-hop song and video distributed mainly online, which has caused a stir in the Chilean community and unleashed a flood of comments, both in favor of the message it gives of informing yourself and not taking information on TV at face value, and others lashing against certain lyrics which tell people to go throw rocks at foreign company’s windows as a way to protest. The full lyrics [es], can be found following the link. Here is an excerpt that speaks about Chile’s president, Michelle Bachelet, translated into English:

Bachelet knows it well because she learned from the gringos studying with the military there in the USA. She earned a degree in defense and national security so don´t buy that false maternal image.
Her DNA is familiar, military and directive and though incompetent she formed a potent team to shoot against the internal enemy, which isn´t the thief in a 3 piece suit but your cousins, your neighbors and your small children.
I teach you with these verses that are like me, SubVerso so that you don´t play stupid like it happened with the story of the “cheese”. If you wish to lose weight then eliminate the weight of the chains and let´s go break the windows of foreign companies.
Chorus
Inform yourself before the TV re-formats you, read and learn from the street as well The rich ones would rather have you ignorant and hide information from you in order to enslave you.

Inform Yourself could possibly be the Chilean equivalent to Billy Joel’s We didn´t start the fire, completely loaded with names, places and events relevant to the current political situation in Chile. This video has come out at a time when the 111 day hunger strike Patricia Troncoso started on behalf of Mapuche Indians rights, the longest one in Chile’s history, came to a close and following the death of Mapuche activist and student Matías Catrileo by Chile’s Special Police Forces.

On an interview Sebastián Larraín Saá had with SubVerso [es], Vicente Durán explains how the video was built collectively by all the people who uploaded the material used on YouTube, and that his idea was to denounce explicitly the corruption in Chile, using examples from real life and not just making veiled references to what is going on: instead, he uses names and events so that listeners can check and corroborate… and inform themselves.

The Inform Yourself video [es] , as uploaded by conspirazion, the collective SubVerso belongs to:

SubVerso performed live last March 6th in front of the London 38 house, a torture and detention center in downtown Santiago run by the Chilean Secret Police during the Pinochet regime. The concert was organized by Memoria 119 [es], a collective which wishes to turn this house into a “memory house” to honour the victims of the brutal tortures which took place. SubVerso’s performance was uploaded by pavelaravena:

SubVerso has joined with other Hip-hop artists in his hometown of Villa Francia as part of the CoN$PiRaZioN group and they have put out a CD, Apaga la tele (Turn off the TV) which can be downloaded free from the group’s MySpace page.