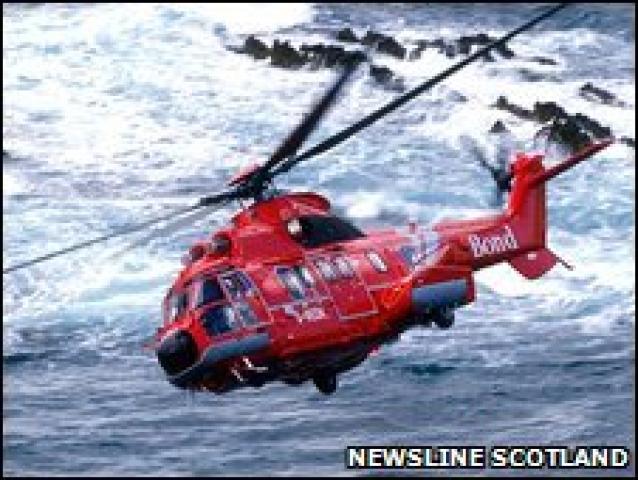 16 people are feared dead after a helicopter crashed into the North Sea off Aberdeenshire.

The bodies of eight people have been recovered after the Bond Super Puma came down about 15 miles off Peterhead.

Searches are continuing despite fading hopes of finding any survivors but debris has been brought ashore.

The aircraft was returning from oil firm BP’s Miller oilfield, 168 miles north east of Aberdeen, when it crashed at about 1400 BST on Wednesday.

Susan Todd of Aberdeen Coastguard told a media conference in the city: "We are now at the extreme of the survival chances for people wearing the suits that they would have.

"That said, we can never discount the will people have to live and therefore we will continue to search with the units we have available."

Conditions at the time of the crash were said to be calm and sunny and it is understood a Mayday message was issued from the helicopter before it hit the water.

The crew of a support vessel saw the crash and sent a boat out but only wreckage was found.

The boat was joined by lifeboats, RAF helicopters and a Nimrod reconnaissance aircraft.

The eight bodies were recovered from the water by the support vessel, Caledonia Victory.

Alex Salmond described the search for survivors as "extremely bleak"

Debris from the wreckage of the helicopter was brought ashore by lifeboat crews late on Wednesday night.

Grampian Police said they had "increasing and grave concerns" for those still missing.

Brian Taylor of the drilling contractor KCA Deutag said he believed ten of his crew were on board, nine from the UK and one from Europe.

Helicopter operator Bond confirmed one of its aircraft was involved.

It carried 14 passengers and two crew.

"Eight bodies have been recovered and I am afraid to say the outlook for the other eight people involved is extremely bleak."

The Air Accidents Investigation Branch (AAIB) said its inspectors were travelling to the scene of the crash.

In February another Super Puma operated by BP crashed in the North Sea.

On that occasion all 18 people on board survived when the helicopter ditched 125 miles east of Aberdeen.

Experts have said the two incidents were different.

Offshore union RMT called for the grounding of the model of helicopter until it was clear what caused it to come down.

Offshore organiser Jake Molloy said: "Reports indicate that today’s crash was the result of a catastrophic failure in the aircraft and it would make sense for the model involved to be grounded until it is clear what caused it."

Bond representative Bill Munro said the company had "every confidence in the Super Puma family", and that its 700 helicopters working worldwide had an "excellent safety record".

He said he had no information to suggest a mechanical failure on the aircraft, and that it was "far too early to speculate" on the cause of the tragedy.

BP spokesman Bernard Looney said the company was co-operating fully with the authorities.

Prime Minister Gordon Brown said: "This has been a tragic day in the North Sea.

"It is at times like these that we remember the risk and the dangers that people have to undergo working to meet our energy needs.

Energy secretary Ed Miliband said: "This is a tragic reminder that workers in the North Sea do their jobs in the most difficult and challenging circumstances."

The Queen sent a private letter of condolence, to be conveyed by the Lord Lieutenant of the City of Aberdeen to the families of lost loved ones, a Buckingham Palace spokeswoman said.