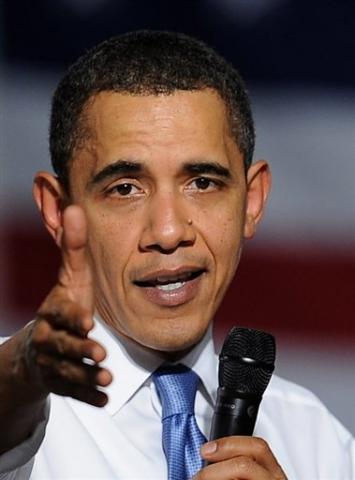 WASHINGTON (AFP) — US President Barack Obama sought to slash through decades of distrust and animosity Friday and launched an historic appeal directly to the Iranian people, urging a resolution of differences and an "honest" engagement with Tehran.

In one of the most decisive foreign policy statements of his young tenure, Obama said Washington was committed to pursuing "constructive ties" with the Islamic republic and that Tehran could take its "rightful place" in the world if it renounced terror and embraced peace.

"My administration is now committed to diplomacy that addresses the full range of issues before us, and to pursuing constructive ties among the United States, Iran and the international community," Obama said in the message marking the start Friday of Nowruz, the Iranian New Year.

"For nearly three decades relations between our nations have been strained," he said. "But at this holiday we are reminded of the common humanity that binds us together."

The two nations have not had diplomatic ties since 1980.Calling the Nowruz celebrations a time of "new beginnings," Obama said he wanted "to speak clearly to Iran’s leaders" about the need for a new era of "engagement that is honest and grounded in mutual respect."

Without specifically restating US allegations of Iran’s support of terrorist activities or its nuclear program which Washington accuses Tehran of pursuing for the last several years, Obama said "the United States wants the Islamic Republic of Iran to take its rightful place in the community of nations."

"You have that right — but it comes with real responsibilities, and that place cannot be reached through terror or arms, but rather through peaceful actions that demonstrate the true greatness of the Iranian people and civilization.

"And the measure of that greatness is not the capacity to destroy, it is your demonstrated ability to build and create."

Nevertheless, Obama’s address clearly signaled his administration’s recognition of Iran as a potential negotiating partner, even though the two countries have not had diplomatic relations since 1980, and that even Obama has declined to take the military option off the table as a way of preventing Iran from obtaining nuclear weapons.By vowing to commit to renewed diplomacy with Tehran, Obama was following up on a key campaign pledge to engage with Washington’s adversaries — and recalling his January 20 inaugural address in which he promised the Muslim world he would "extend a hand if you are willing to unclench your fist."

The comment prompted a swift response from Iranian President Mahmoud Ahmadinejad, who encouraged Obama to embark on meetings with adversaries but urged him to "put an end to the expansionist policies" of the United States."If you talk about change it must put an end to the US military presence in the world, withdraw your troops and take them back inside your borders," Ahmadinejad said.

Obama’s landmark video statement marked a stunning drawback from the aggressive rhetoric of his predecessor George W. Bush, who famously lumped Iran into an "Axis of Evil" with Iraq and North Korea.

It is also a tacit recognition that Tehran is a key player in several hot-button issues for the United States, including how Washington extricates itself from Iraq, US efforts to tamp down a resurgent Taliban in Afghanistan, and progress on the longstanding Middle East conflict between Israel and its Arab neighbors.

The White House said a version of the video with Farsi subtitles was distributed to news outlets in the region Friday and would air at approximately 8:00 am Iran time.An online version would also carry English and Farsi captions, it said.

In Obama’s apparent olive branch, he described a sought-for future of renewed exchanges and "greater opportunities for partnership and commerce."It’s a future where the old divisions are overcome, where you and all of your neighbors and the wider world can live in greater security and greater peace."