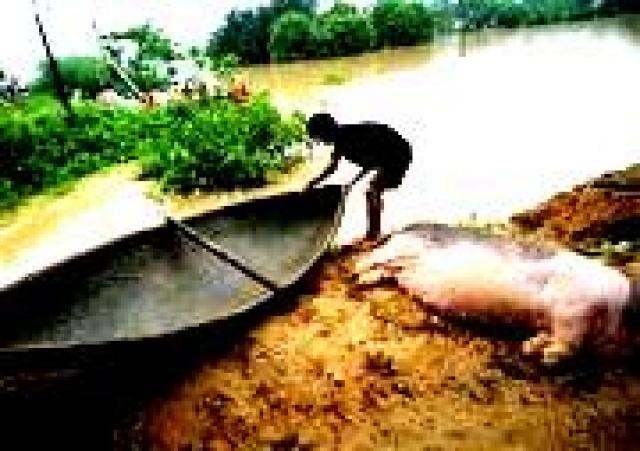 Flash floods and landslides brought by tropical storm Kammuri since Saturday have battered mountainous villages in northern Vietnam, killing more than 100 people and leaving 48 missing, the government said on Monday.

The toll from the disaster is expected to rise. Communication links were still cut off for many affected areas even though river waters were receding after nearing their highest level in four decades, disaster officials said.

A tropical low-pressure system in the Tonkin Gulf and moving towards the northern region would dump heavy rains and trigger landslides from late Monday, the government said in an urgent message to the military, police and rescue forces.

It urged disaster management authorities to tighten monitoring of river and sea dykes and "to actively evacuate people and property from dangerous areas."

Authorities in coastal provinces should direct ships out of the path of the low-pressure system, often the first stage of a tropical storm, the government said.

Lao Cai province, bordering China, was the hardest hit with 38 people missing and 36 people killed since late last week, the National Centre for Flood and Storm Prevention said in a report.

Officials in Lao Cai, popular among foreign tourists for its mountain resort town of Sapa, said all of the dead and missing were local people whose homes were washed away by flash floods.

At least 33 people were killed in the neighboring province of Yen Bai, many buried alive as landslides hit at night as they slept.

Filed under: Opinion, World
Share Tweet Pin G Plus Email
previous article: China shares collapsed despite Beijing Olympic
next article: The Bright Side of the End of Bennigans