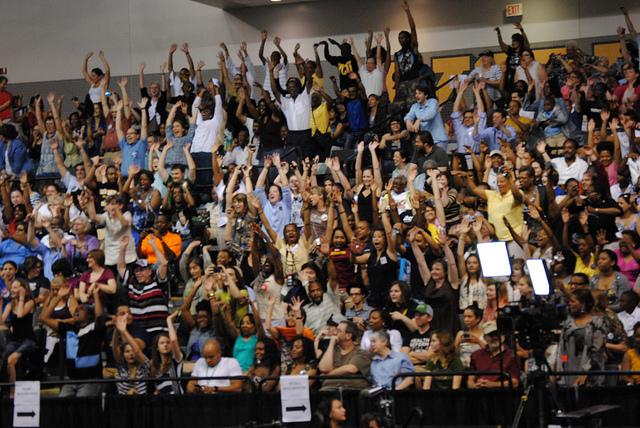 RICHMOND, Va. – Thousands of Virginians were “fired up” to see Barack and Michelle Obama at the Democratic presidential campaign’s “Ready to Go Rally” on Saturday.
The rally was aptly named for a chant created by South Carolina resident Edith Childs at a campaign stop in 2008. She exhorted then-Sen. Obama and a room of 20 rain-soaked supporters to get “fired up and ready to go!” Now it’s the official rallying cry for Obama’s re-election bid.
Many people who packed Virginia Commonwealth University’s Siegel Center on Saturday were college students and local supporters. Others came from across the state, including a group of Democratic supporters from Carroll County in southwestern Virginia.
Even 11-year old Isabel Largen volunteers for the Obama campaign with her grandmother, Regina Largen.
“Obama should be re-elected because he’s going to make the country better,” Isabel said. “He’s helping people with health care, education and the environment, and that’s really important.”
Regina Largen noted that not everyone in Carroll County shares such views. The county, population 30,000, has higher poverty and unemployment rates than the state averages. Republicans blame Obama for failing to fix the economy.
“We’ve been working to establish something in Carroll County. It’s predominantly Republican. Our goal is to register people to vote and make sure we get our Democrats out to vote,” Regina Largen said.
The Largens as well as their friends Janet Tate and Chris Roth participated in a phone bank for the Obama campaign.
“We’re now fired up and ready to get back to Carroll County to spread the word,” Roth said.
Janie and James Ricks also were inspired by what the Obamas had to say. They could relate to President Obama’s upbringing.
“I was also raised by a single mother who was struggling to do what she could to help send me to school. So I can relate to him a lot more than I can to Mr. Romney because of our backgrounds,” James Ricks said.
Janie Ricks also was raised by a single mother. “She did what she could do to send me to send me to college.”
Stephanie Hyman of Richmond is going through the same struggles as a single parent of two children. Moreover, Hyman lost her job three years ago. She said President Obama stands for people like her.
“I’m exactly the person he’s talking to,” Hyman said.
She supports Obama’s stands on women’s rights. Hyman criticized the Republican Party for policies she says would “roll back” progress for women.
“I never imagined 30 years ago that we would still be having arguments over contraception, Roe v. Wade or for union worker’s rights. It’s ludicrous. They want to live in a bubble in the mid-1950s,” Hyman said.
Loudoun County resident Patricia Pryor made the trip to Richmond on a bus with other Obama supporters.
“We came down loud – partying and ready to go,” Pryor said. “We had singing. We had signs. We had a slogan.”
Pryor volunteers by registering voters at her local library. Her occupation as a nurse influences her support for Obama’s health care policies: “I see people living because they have good health care, and I see people dying because they don’t have good health care.”
Filed under: Politics, US
Share Tweet Pin G Plus Email
previous article: Obama Kicks Off Campaign with VCU Rally
next article: Arrangements for Darbars move offices re-opening at Kashmir