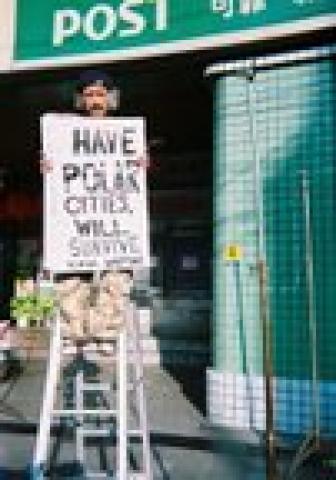 I can’t be here in person to address you, since I passed into oblivion long ago. But as a member of the graduating class of 1971 at this esteemed university on a hill, I wanted to leave you with a brief message — from the past to the future — about global warming and climate change.

As the class of 2099, you are about to enter the 22nd Century in a few more months, and you will bring with you not only your Tufts experience but also your career expectations and personal anxieties as citizens living on a planet in the midst of a Long Emergency. I’m sure you’ve heard this term a lot these past four years — "The Long Emergency" that writer James Howard Kunstler wrote about almost 100 years ago — but you should know that in my days as a student we never used the phrase. We had not even heard of it yet!

Back then, we were still focused on terms such as the Cold War, nuclear winter, the war on poverty, racism, the oil shock, the Middle East situation, and later on, towards of our "three score and ten" on Earth newer terms such as 9-11, terrorism and global warming.

I’m not around now, but I hope you can "hear" my message hereand perhaps view it on a digital recording on the library. Before I continue, I just want to take a few moments here to wish you all the best of luck in your future life and the best of health to enjoy the luck that I am wishing for you. May all your dreams come true, and then some!

Members of the Class of 2099, you are living in a very crucial time in the history of humankind. Your world stands at the threshold of a period of human history when very important decisions will have to be made about the use of fossil fuels and the "consume! slash! burn!" lifestyle that you have come to expect.

I wonder: do the names James Lovelock or James Hansen or Al Gore still ring a bell in your generation now, or have new faces and names replaced these far-seeing men? Is that book by Mark Lynas, titled SIX DEGREES, still in print, or has a new besteller on climate change become the must-read of your generation? Is that documentary from 2006, AN INCONVENIENT TRUTH, still in circulation? And what about Leonardo DiCaprio’s THE ELEVENTH HOUR? Have you ever heard of the movie, or has it been all but forgotten in your day and age?

By the way, have you men and women of the Class of 2099 heard by now about such global warming adaptation strategies as sustainable population retreats in the northern regions, once referred to as "polar cities"? The term was coined in 2006 and a few people blogged about the concept for a couple of years, not with much success or public acceptance, before others took over the idea and went even deeper into the concepts involved.

I want to leave you with seven words: "We must tighten the noose around coal". Dr Jesse Ausubel of Rockefeller University wrote those words more than 100 years ago, and they were prophetic. Has your world tightened the noose around coal? Has your world started to tackle the vexing problems of overpopulation, climate change and the creation of a sustainable economy? Is global warming something that will shape your future, or are the denialists out there still complaining that it is a hoax?

Whatever your own personal views are about global warming, pro or con, or just sitting on the fence in the middle of the debate, you should know this: there is not much time left. I hope your generation finds a way to stop the burning of fossil fuels and also finds ways to mitigate the impact of climate change on your future world. I just said that "there is not much time left". Maybe I should have said "time is running out". Or maybe I should have said: "Time has run out."

Whatever. Class of 2099, go out and help create your world. Good luck and God bless!

Filed under: Health & Science, Politics
Share Tweet Pin G Plus Email
previous article: Ten per cent of UK Kids are Mutts
next article: How Will You Remember Obama’s Inauguration?